We were in a public eatery outside Paris, surprised to find ourselves stumped by the question of how to get a serving of vegetables without taking any meat. The server handed customers plates only after putting one of several meat options on them, and my colleague, Raychel Santo, and I were eyeing the vegetable trays at the end of the line. We passed on the meat, but when we got to the veggies, drama ensued: because we’d passed on the meat, we didn’t have plates. We had to go backwards and ask the meat servers for plates, at which point they started to scoop meat onto them. No, just the plates, please. Just the plates? What will you do with just a plate? Granted, my French lacks finesse. But surely it can’t have been that unusual for people at the world’s major climate change conference to skip meat?

The incident in fact reflected our overall experience of marginalization at the COP21.

We were invited there by the Meatless Monday campaign to share the well-supported evidence that if we’re serious about meeting our greenhouse gas emissions goals for reducing catastrophic climate change (even the less-ambitious 2-degree goal) we must address meat consumption. University of Cambridge researcher Bojana Bajželj and colleagues have shown that business-as-usual food consumption will eat up essentially all of our global greenhouse gas emissions budget by 2050, leaving nothing left for energy, transportation and all the other sectors. We can make a dent by improving production methods, but there is no way around what seems to be the elephant in the room—the need to dramatically reduce the number of cattle raised on the planet.

According to the U.N., livestock production is responsible for 14.5 percent of global greenhouse gas emissions. The emissions culprits range from cows belching (the leading cause), to off-gassing from manure, to nitrous oxide emissions from animal feed and the energy-intensive process of producing the feeds. In some places, such as the Amazon, clearing land for feed production and pasture is a huge problem, releasing long-held CO2 into the atmosphere when forests are cut down and peat and soil are disturbed.

In the COP21 talks, there was some attention paid to two extremely important agriculture-related topics: the replanting of forests as a way to mitigate emissions; and the threats to future food production.

But what was off the radar—almost taboo, even—was the topic of meat consumption. A few countries mentioned plans to address livestock production, generally with the aim of improving production methods. To our knowledge only one discussion panel besides ours focused on meat consumption, from among the hundreds inside and outside the official events. In fact, far and wide in Paris, from museums to outdoor displays, the only messages related to diet that we observed centered around topics such as agrobiodiversity, pollination, urban agriculture innovations, and carbon sequestration from pasture-based systems.

So why wasn’t anyone discussing meat? Here are our seven best guesses.

I met people from all over the world at the conference. When I mentioned my reason for being there, some people lit up and thanked me for talking about it. More often I felt people withdraw, as if by talking about this issue I was judging them. I truly do not judge, and I do eat some eat meat. As I see it, our work is to shift our norms and create policy change in order to reduce meat consumption on a broad scale. It was striking how consistently these mostly policy-oriented people connected personally and emotionally to the meat issue, and did not readily see it in policy terms.

My biggest take-away from the COP21 was a renewed sense of urgency. The longer it takes to get our emissions under control, the more horrific the outcomes for public health, people and ecosystems. The plight of people from the low-lying nations becomes much more real when they’re sitting next to you. It’s not only meat consumption; we’ve got to be working on climate change from every angle possible. The most important outcome in Paris is that they got an agreement, and that it is ambitious, with or without meat.

Ultimately it was not surprising that agriculture was not mentioned in the Agreement text. And yet, there’s this: “Parties strive to include all categories of anthropogenic emissions or removals in their nationally determined contributions…” and: “Parties shall provide an explanation of why any categories of anthropogenic emissions or removals are excluded.” And finally: “that sustainable lifestyles and sustainable patterns of consumption and production, with developed country Parties taking the lead, play an important role in addressing climate change.”

That’s an opening, and it’s up to all of us to run with it. With focused effort, agriculture and meat consumption can be key targets of future action. 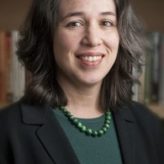 Roni Neff, PhD, directs the Food System Sustainability and Public Health program at the Johns Hopkins Center for a Livable Future. She is on faculty at the Bloomberg School of Public Health.

Defending the Right to Food at the World Trade Organization