Home » Agriculture » What Will a UNESCO City of Gastronomy Do for Tucson and for Other Cities?

In December, Tucson, AZ Mayor Jonathan Rothschild announced that the city been designated the first UNESCO City of Gastronomy in the United States, becoming only the sixth metropolitan area in the country to join the United Nations’ Creative Cities Network.

The effort to achieve this designation took a dozen of us two and half years to accomplish. But non-profits, business alliances, government offices, universities, farmers, food bank managers and chefs learned to row in the same direction toward a common goal. That goal is tangibly advancing a more just, inclusive, healthful, prosperous, and sustainable food system; one that will be more resilient in the face of climate changes because it fully engages the unique cultural and natural assets of our community.

With more than 200,000 commentaries and congratulatory messages on social media, websites, and by telephone within four days, it has become clear to us that many individuals and constituencies in our community are on board with this goal. Furthermore, food justice activists in many other cities are eager to see what they can learn from Tucson’s success that can be applied to their own communities.

The irony, of course, is that Tucson’s food system is not perfect; in other words, it, like many others, in the process of being fixed. Tucson is not even a major destination for foodies and gourmets like New Orleans, Charleston, Portland, Santa Fe, Boston, or New York City. But that, in fact, is not what UNESCO is after, nor is it Tucson’s ambition to behave as a Santa Fe wanna-be. Instead, we want to demonstrate that even within a place that has suffered for decades from grinding poverty, water scarcity, and food insecurity, as well as high levels of diabetes and obesity, food systems innovations are now positively changing the health status of our citizens and the viability of our livelihoods and public institutions for the better.

Tucson prides itself on being the metropolis in North America with the oldest continuous history of agriculture within its city limits: 4,100 year old corn remains and 3,500 year old irrigation ditches can be found just a few miles from its downtown. While such an extraordinary cultural heritage of cultivating and processing native foods certainly matters to UNESCO, the City of Gastronomy honor came on the basis the city’s capacity for entrepreneurial innovations grounded in social and ecological values unique to this place.

Tucson is home to one of the oldest nonprofit community seed banks in North America—Native Seeds/SEARCH—that over a quarter century, has put tens of thousands of packets of desert-adapted seeds in the hands of Native American, Hispanic & immigrant gardeners, farmers and schoolchildren in its foodshed. More recently, the Pima County Public Library has become a leader in the seed library movement, offering free seeds to home gardeners and schools through all of its seventeen branches in Tucson and its surrounding farm towns. Tucson not only hosted the first-ever convening of the nation’s heirloom seed activists at its historic Seed Banks Serving People forum in 1983; it again hosted seed activists at the first International Seed Library Forum in May of 2015. Today, nearly every farmers market in Tucson allows low-income residents to use SNAP benefits to purchase  seeds, seedlings, and fruit tree transplants from local vendors. Many in the community simply sees access to place-based seeds as a fundamental element of the human right to eat in a healthful and culturally-appropriate manner.

The same kinds of innovations have occurred in Tucson’s use of water to grow food. It was one of the first cities in the country to fully embrace low-water requiring edible landscaping and permaculture plant guilds in public spaces and private yards. When rain barrels for rooftop runoff collection became commercial available, tens of thousands of Tucson’s integrated them into their management of home orchards and vegetable gardens. Then, local water harvesting wizard Brad Lancaster convinced the city government to cut open the curbs of paved streets so that storm runoff from roads could re-green walkways and yards, thereby reducing the urban heat island effect.

When elderly urban residents who are housebound are unable to pick the citrus, pomegranates, and dates in their own yards, immigrant women affiliated with the nonprofit Iskashataa Refugee Network will come to glean them. Well over 100,000 pounds of edible fruit are annually being rescued from backyards and boulevard medians by these newcomers to Tucson, who use traditional methods from back home to process them into vinegars, syrups and healthful snacks.

When the University of Arizona anthropologists first pioneered food waste reduction in the 1980s through its internationally-famous Garbage Project, it became painfully obvious how much food American households let spoil once they bring it home from markets and stores. Today, dozens of university students who call themselves the “Compost Cats” not only collect all food waste on campus, but also do so from dozens of restaurants and cafes nearby, converting all of it into compost for gardens and farms in association with the Native American farm known as San Xavier Co-op.

Tucson area food banks are also national leaders in rescuing and redistributing produce from border brokers, in providing fresh locally-grown foods not just canned goods to low-income residents, and creating farm incubators where underemployed residents can grow food for themselves and for sale at farmers markets. Some of this food also ends up being used by Tucson’s astonishing number of food trucks, taco carts and mobile catering services. In fact, Tucson is tied with Los Angeles for having the greatest density of food trucks among major American cities.

Unlike San Francisco or Boston, most of these innovations have not been accomplished with philanthropic or government or conventional financing, but through entrepreneurial approaches that draw upon alternative financing. Arizona is top-rated among all states by the Kaufman Institute for Entrepreneurship for the number of independently-owned start-up business it has per ten thousand residents. In particular, Tucson ranks near the top of all cities surveyed in its number of restaurant and food truck start-ups, privately-funded community kitchens, community garden growers selling into farmers markets, and artisanal producers of value-added heritage foods.

And yet, Tucson remains plagued by the presence of seven U.S. Department of Agriculture identified food deserts within ten miles of its hundred-year-old land grant university, by food insecurity being suffered by a third of its residents and by soaring rates of childhood diabetes and obesity. That’s why the Tucson Unified School District has partnered with the Community Food Bank of Southern Arizona and the University of Arizona to bring vegetable gardens onto every school campus and locally-produced fresh foods into every school cafeteria. While such goals are not accomplished overnight, the Mayor recently appointed a Commission on Food Security, Heritage and Economy to break down the barriers to achieving such objectives.

Rather than merely using its new honor from UNESCO to attract culinary tourists, Tucson has rededicated itself to taking better care of its many residents that have formerly been marginalized by the globalized, industrialized food system. Its first public event as a UNESCO City of Gastronomy will be hosting a two day symposium called “Food Justice, Faith, and Climate Change” February 11-12th, 2016 at the new Center for Regional Food Studies on the University of Arizona campus (to pre-register and see full agenda see http://foodstudies.arizona.edu/). It will bring together advocates for farmworkers and food service workers, faith-based communities, food and climate justice activists, social scientists, and government agencies to forge broader alliances to vanish hunger and food insecurity in the face of a hotter, drier, and more water-scarce climate. For further information, contact Gary at gpnabhan@email.artizona.edu. For more information: www.tucsonaz.gov/gastronomy

Gary Paul Nabhan is an internationally-celebrated nature writer, food and farming activist, and proponent of conserving the links between biodiversity and cultural diversity. He has been been honored as a pioneer and creative force in the “local food movement” and seed saving community by Utne Reader, Mother Earth News, New York Times, Bioneers and Time magazine.

As the W.K. Kellogg Endowed Chair in Sustainable Food Systems at the University of Arizona Southwest Center, he works with students, faculty and non-profits to build a more just, nutritious, sustainable and climate-resilient foodshed spanning the U.S./Mexico border. He was among the earliest researchers to promote the use of native foods in preventing diabetes, especially in his role as a co-founder and researcher with Native Seeds/SEARCH. Gary is also personally engaged as an orchard-keeper, wild foods forager and pollinator habitat restorationist working from his small farm in Patagonia, Arizona near the Mexican border. He has helped forge “the radical center” for collaborative conservation among farmers, ranchers, indigenous peoples and environmentalists in the West.

Agricultural historian Peter Hatch of Monticello has called Nabhan “the lyrical scholar of genetic diversity.” As an Arab-American essayist and poet, he is author or editor of twenty-four books, some of which have been translated into Arabic, Spanish, Italian, French, Croation, Korean, Chinese and Japanese. For his creative writing and its influence on community-based conservation, he has been honored with a MacArthur “genius” award, a Lannan Literary Fellowship, a Southwest Book Award, the John Burroughs Medal for nature writing, the Vavilov Medal, and several honorary degrees and lifetime achievement awards.

He works most of the year as a research scientist at Tumamoc Hill and the Southwest Center of the University of Arizona, but he is also engaged with several food justice and farming alliances, including Sabores Sin Fronteras, Santa Cruz Valley Heritage Alliance, Wild Farm Alliance, Renewing America’s Food Traditions, and the Borderlands Habitat Restoration Initiative. Nabhan is humbled and honored to serve as a professed Ecumenical Franciscan brother, helping the Franciscan Action Network in shaping ethical responses to environmental injustice, to immigration issues and to climate change.

Learning Lunchrooms: We Can Change School Food, But Can We Change the Ideology? 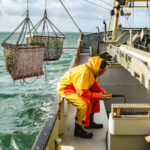