Representatives of Familias Unidas por la Justicia (Families United for Justice or FUJ) recently signed a labor contract with Sakuma Brothers Farms. This is the first new farm workers union in the United States in a quarter-century, and the second independently-formed farm workers union in Washington state in the last 30 years. On 1995, after eight years of struggle, the United Farm Workers Union (UFW) secured an agreement and signed a contract to unionize the workers at the Chateau Saint Michelle Winery in the Yakima Valley.

More than two decades later, in 2016, FUJ won a vote to represent all of Sakuma workers and now gathers more than 500 people. It is affiliated with Washington State Labor Council, AFL-CIO, which is a voluntary organization that represents more than 400 rank-and-file union members from more than 600 local unions throughout the state.

As the first union led by indigenous laborers, the organization was born out of the effort of the berry-pickers working for Sakuma in its fields in Burlington and Mt. Vernon, in Washington state, where there is no law establishing a process for union elections of farm workers and farm workers aren’t covered by the National Labor Relations Board.

Members of FUJ come originally from towns in Oaxaca and southern Mexico —home of Mixteco and Triqui indigenous communities— who depend on this seasonal job for large part of their yearly income. According to their vice president, Filemon Pineda, they “are part of a movement of indigenous people,” fighting against the discrimination indigenous people face both in Mexico and the United States.

The movement began in 2013 after a worker was fired due to some complaints they made to the company about the low piece rate and poor conditions in the labor camps. The rest of the workers stopped harvesting in solidarity and elected a committee to speak for them: later it became the nucleus of Familias Unidas por la Justicia.

Among the union’s gains in the new contract are the establishment, in effect, of a piece-rate system designed by the workers so that an average worker con make the equivalent of at least US$12 per hour. In addition, all workers are guaranteed a US$12 hourly minimum. Other protections include a just cause for any disciplinary measures, union representation in case of grievances, and a seniority system that ensures workers this year will be able to return in the following years.

The sign of the new contract closes a chapter of four years of organized action—strikes, boycotts, marches, and communications with Department of Labor offices—from the FUJ and their allies, including workers in Baja California, Mexico; Baja’s San Quintin Valley; and the Binational Front of Indigenous Organizations (FIOB).

Although small, union workers for Sakuma Brothers Farms will now have a wage level substantially above the surrounding growers, and FUJ plans to use that as a lever to inspire other workers to set up their own independent unions. 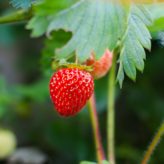 Estefanía is a freelance writer based in Mexico.  She has a degree in Sustainable Water Management and has mainly researched food-water social issues. She's invested in public awareness concerning nutrition, equity, and sustainabily.

Watch: Danielle Nierenberg on Outliers in Global Impact—Ingredients for Success

Climate Change Could Kill off Ethiopian Coffee within 70 Years