I participated in one of the famous Terra Madre Slow Food meetings in Italy years ago. At the opening ceremony, Indigenous Peoples from around the world processed through the venue donning traditional wear and carrying objects of significance to their communities. It was beautiful and exciting but more importantly, it was a poignant reminder of the wisdom of indigenous knowledge. Every year, I become more convinced that if we are to meet the challenges of extreme climate change and transform food systems so that they are resilient and equitable, we must listen to indigenous communities, stand with them, and include them in decision making on land that they have sustained for thousands of years.

Many people are excited about the potential for innovation in agtech and I count myself among them. Yet in our rush to “Silicon–Valley” our food system, we have overlooked the urgency to better understand, honor, safeguard, preserve, and transmit traditional knowledge. I suspect that in the United States, more money was poured into the MIT Food Computer, which turned out to be a hoax, than was invested in preservation of landraces curated by Native Peoples and understanding Indigenous protocols against the over-harvesting of species.

First, at least as far back as the United Nations’ 1992 Convention on Biological Diversity, governments have recognized Indigenous Peoples’ knowledge of, and contributions to, the protection of biodiversity. The full promise of that Convention has yet to be realized as scant resources have been devoted to its implementation. That may be changing. In September, at the U.N. Climate Action Summit, Emmanuel Farber, CEO of Danone, citing pressure from Generation Z consumers, announced that 19 giant companies have pledged to work together to protect biodiversity. This is great!

Second, soil is in the headlines. Native Americans have long championed three-sister-planting and other practices that build healthy soil, even in badlands, but until recently, soil building was not on the policy agenda in any significant way. Now, even American presidential candidates are advocating for regenerative agriculture and elevating the importance of soil health while at the same time public and private sector leaders are working to establish carbon markets to reward soil sequestration. Exciting!

Third, there is a new focus among sustainable agriculture advocates on strategies to address food justice, entrenched inequalities, and social inclusion. At the same time, the American Indian Agricultural Fund, established from settlement monies from resolution of the class-action lawsuit Keepseagle v. Vilsack over historic U.S. Department of Agriculture discrimination, is distributing its first round of grants to help Native American farmers and ranchers. Terrific!

Biodiversity, healthy soils, and food justice—all topics on the agenda for which Indigenous Peoples have insights and can help academics like me, along with business leaders, presidential candidates, and sustainable agriculture advocates learn from traditional wisdom.

I will now say something that I have never said before: the more meetings, the better! It is time for all of us to find ways to raise indigenous voices and confront issues of food sovereignty. There are some good recent efforts to note. In 2018, the U.N. Food Agriculture Organization held its first High Level Expert Seminar on Indigenous Food Systems, Building on Traditional Knowledge to Achieve Zero Hunger. This fall, Slow Food hosted Indigenous leaders from 27 countries in Japan to discuss the contributions of traditional knowledge to sustainable food systems, climate change, and world hunger. Following up on this, Slow Food will host an Indigenous Peoples Terra Madre for the Americans in Mexico in February 2020.

For our part, the Swette Center for Sustainable Food Systems at Arizona State University is collaborating with the University of Hawaii and Food Tank to host a Food Tank Summit on the “Wisdom of Indigenous Foodways” to be held January 22, 2020 in Tempe, Arizona. We will discuss the importance of local, agriculturally-derived knowledge, seed sovereignty, wild foods, and contemporary indigenous gastronomy. We will explore ways in which young people can effectively support indigenous communities. We will taste native foods. People may attend in person or via webcast, with details on how to participate on our website, https://foodsystems.asu.edu 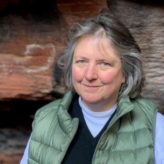 Kathleen Merrigan is the inaugural Executive Director of the Swette Center for Sustainable Food Systems at ASU and the Kelly and Brian Swette Professor of Sustainable Food Systems, with appointments in the School of Sustainability, College of Health Solutions, and School of Public Affairs. She came to ASU after four years as Executive Director of Sustainability at George Washington University, where she led the GW Sustainability Collaborative, GW Food Institute, and was Professor of Public Policy, with appointments in the schools of public policy and public health.

From 2009 to 2013, Dr. Merrigan served as U.S. Deputy Secretary and Chief Operating Officer of the U.S. Department of Agriculture (USDA), a US$150 billion, 110,000 employee institution. As Deputy Secretary, Dr. Merrigan created and led the Know Your Farmer, Know Your Food Initiative to support local food systems; was a key architect of First Lady Michelle Obama’s Let’s Move! campaign, and made history as the first woman to chair the Ministerial Conference of the U.N. Food and Agriculture Organization. Before joining the USDA, Dr. Merrigan was a professor at the Friedman School of Nutrition Science and Policy at Tufts University where she directed the MS/PhD Agriculture, Food and Environment Program.

Currently, Dr. Merrigan serves as Co-Chair for AGree, Board Director for the World Agroforestry Centre, Stone Barns Center for Food and Agriculture, FoodCorps, and Center for Climate and Energy Solutions (C2ES) as well as Steering Committee member for the U.N. Environment Programme-led initiative TEEB AgriFood. Dr. Merrigan is a partner in Astanor Ventures and an advisor to S2G Ventures, two firms investing in ag-tech innovations.

Recognizing the history and scope of her work, Time Magazine named Dr. Merrigan among the “100 most influential people in the world” in 2010.

From Sea to Site: Tracking Sustainable Fish for Consumers Nationwide