The U.N. General Assembly declared 2013 the International Year of Water Cooperation. And the theme of this year’s World Water Week, September 1st-September 7th, is “Water Cooperation: Building Partnerships.” This week, scientists, nonprofit organizations, and policymakers all over the world will convene at the Stockholm International Water Institute in Sweden to discuss new research and developments in water conservation – and most importantly, what needs to be done to ensure the protection of one of Earth’s most valuable resources for future generations.

According to the most recent estimates by the World Health Organization (WHO) and the U.N. Children’s Fund (UNICEF) Joint Monitoring Programme (JMP) for Water Supply and Sanitation, 768 million people do not have access to clean water, and two and a half billion people do not have access to adequate sanitation facilities. Contaminated water plays a significant role in malnutrition—vomiting and diarrhea caused by water-borne diseases prevent the absorption of key nutrients in food, and are responsible for the deaths of approximately 1.3 million children every year.

Meanwhile, crops that are nourished with contaminated water can carry dangerous pollutants, such as mercury and arsenic, which can inhibit crop growth and potentially sicken people who consume the crops. Unfortunately, agriculture is not only a primary contributor to global water use – approximately 70 percent of the world’s water use is concentrated in farming – but also to water contamination. U.N. Water estimates that the food sector contributes 40 percent of organic water pollutants in industrialized countries, and 54 percent in developing countries. And the Barilla Center for Food & Nutrition (BCFN) reports that if everyone in the world had the same consumption habits as North Americans and Europeans, a 75 percent increase in water resources would be necessary to sustain them.

During World Water Week, Food Tank will also highlight research and innovations that are working around the world to conserve water resources and make clean water available to everyone. But most importantly, these should serve as inspiration for cooperation. Research institutions, private businesses, governments, and the donor community can all work together to…

…research simple innovations for providing clean water to households. There are already several low-cost, simple innovations that are available to households in areas with limited access to clean water. For example, SODIS is a method of solar water purification by which untreated water is placed in transparent bottles and heated and disinfected by UV rays. Charcoal filters and biosand filters can also remove impurities and pathogens from water. The organization ECHO is training development workers to construct low-cost biosand filtration systems. However, further research and funding needs to be directed toward developing similar methods for at-home water purification.

…build infrastructure for communities. Giving communities the means to access water for personal consumption and for agriculture is a crucial step in global development. In Niger, the International Crops Research Institute for the Semi-Arid Tropics (ICRISAT) has constructed solar drip irrigation systems for market gardens. Their model has been replicated by other organizations, such as the Solar Electric Light Fund (SELF), which implemented a similar system in a women’s farming cooperative in Benin. Drilled wells, although expensive to implement, are useful in helping communities access underground aquifers. Governments and nonprofits, such as The Water Project, primarily fund construction of this infrastructure, but there are also opportunities for the private sector to contribute. For example, People Water is a for-profit company, and its Drop for Drop program puts money from bottled water sales toward building and maintaining drilled wells in Haiti, India, and other developing regions.

…implement low-resource farming practices. For centuries, farmers across the world have used traditional methods that conserve water. As population demands on agriculture increase, global agricultural water consumption is expected to increase by 19 percent by 2050, indicating a need to expand on water-conserving farming methods. Both new techniques – such as solar-powered drip irrigation methods in Benin – and old – such as zai, an effective form of rainwater harvesting in Burkina Faso, should serve to inform the future of farming. 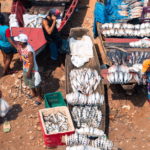