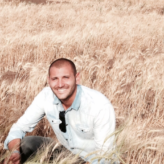 Italian born, American and Australian educated, since 2012 Dr. Fillip BassiI lives in Rabat, Morocco where he leads the international breeding program of ICARDA for the improvement of durum wheat. This program aims at delivering to farmers in the developing World superior varieties that increase the productivity per unit of land in face of the climatic challenges. Since its inception in 1981, this breeding program has released more than 100 varieties in over 20 countries.

In this role, Dr. Bassi conducts regular missions in the rural areas of Ethiopia, India, Senegal, Mauritania, Lebanon, Algeria, Tunisia, and several other countries to investigate the challenges and improve the capacity of delivering innovation by local plant scientists.

He strongly believes in the deployment of the most advanced biotechnology and statistical techniques in combination with the wide use of historical and primitive germplasm with large genetic diversity to achieve the sustainable improvement of top yielding varieties.

He holds a PhD in Plant Breeding and Genetics from North Dakota State University and a Master in Plant Biotechnology from a joint program between the University of Reggio Emilia and the University of Adelaide. Dr. Bassi was recognized with the prestigious Beachell-Borlaug Scholarship, then later become an adviser to two awardees of the same scholarship. He currently helps along their path to higher education 13 PhD students from India, Morocco, Algeria, Ethiopia, Mauritania, Senegal, and Syria.

Additionally, he is a member of the Scientific Steering Committee of the Expert Working Group in Durum Wheat of the Wheat Initiative. He is a strong supporter of active communication by “experts” to prevent the misinformation provided by “non-experts”. Finally, Dr. Bassi supports the integration between public and private enterprises to deliver from poverty countries in Africa and the Middle East. All views are his own only.

A group of scientists won the 2017 Olam Prize for Innovation in Food Security for applying advanced breeding techniques to strains of primitive and modern wheat to develop a set of durum wheat varieties that can not only withstand constant 35 to 40 degree Celsius (95 to 104 degree Fahrenheit) heat, but also grow remarkably fast, in only 92 days.