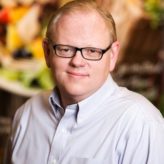 For over 20 years, Scott Davis was responsible for bringing the customer experience alive multi-dimensionally in Panera’s bakery-cafes. His work included the ongoing evolution of the Panera Bread concept for which he drew on longtime experience at Panera as well as his time with Saint Louis Bread Co. where, in 1996, he spearheaded the creation of its new prototype bakery-cafe. The sourcing, quality assurance, contract manufacturing and logistics teams also reported to Davis.

He joined Au Bon Pain Co. as a Store Manager in 1987. In 1993 he became New Concept Manager and led the development of the company’s Choices concept. In 1995, he was tapped to create an R & D team for Saint Louis Bread Co. which later became known as Panera Bread as it expanded nationally. Davis was named Director that same year and has since led the Panera concept team. In May 2010 he was named Executive Vice President and was honored by Nation’s Restaurant News with its 2011 MenuMasters Innovator Award.

Food Tank recently had the opportunity to speak with with Scott Davis, formerly of Panera Bread, who was one of the speakers at the 2015 Food Tank Summit.