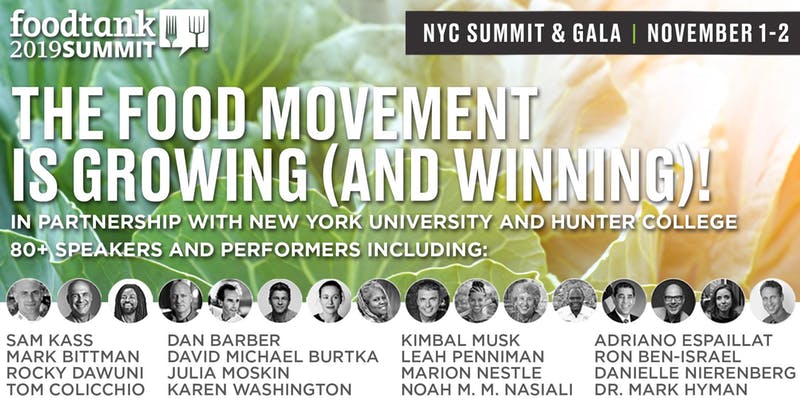 This Food Tank Summit and Gala brings together 80 speakers and performers including major CEOs, disruptors, changemakers, activists, policymakers, and leaders from startups, media organizations, large companies, and nonprofits who are leading the shift in how food businesses look at sustainability. Held in collaboration with New York University-Steinhardt and the Hunter College NYC Food Policy Center.

Summit Day 1 at the Skirball Center for the Performing Arts

“A New Era for Whole Foods”

“Can Business Do Good?”

“A Roadmap for Small and Big Together.”

“Farming While Black: A Conversation with Leah Penniman”

“Putting Farmers in the Drivers Seat of Food System Change”

“A Conversation with Mark Bittman”

“What’s the Future of Food?”

At the reception and dinner you will be joined by nearly all the Summit speakers, featuring a six-course dinner curated by Great Performances by select rising-star female chefs from each of New York City’s five boroughs.

“A Fireside Conversation with Ron Ben-Israel”

Breakfast (included) curated by Great Performances starting at 8:30AM.

“Sustainability at the Center of Food Business”

“A Conversation with Dr. Mark Hyman”

[with special thanks to Farmers Fridge and ‘Witchcraft!]

“A Conversation with Dan Barber”

“How to Tell the Story of Food”

“A New Vision for Food Education and Distribution”

“A Conversation with a Very Special Surprise Guest!”

Food Tank Summit general admission tickets include access (first come first serve GA seating) to all venues and events for both day of the Food Tank Summit (more than 70 speakers and performers) along with light snacks/coffee on November 1st as well as breakfast and lunch on November 2nd (breakfast provided by Great Performances, coffee by Think Coffee, and lunch donated by Tom Colicchio and ‘Wichcraft).

Includes all the benefits of a general admission ticket plus VIP access to the Food Tank Summit (guaranteed front of the house reserved seating all venues), and is the only way to get exclusive access to the Food Tank Summit Reception and Dinner. At the reception and dinner you will be joined by nearly all the Summit speakers, featuring a five-course dinner by select rising-star chefs from each of New York City’s five boroughs, incredible speakers, Broadway stars at nearly every table, and featuring a worldwide debut performance of Food Tank’s new interactive off-Broadway original musical about climate change called “Garjana,” with songs written and performed live by Rocky Dawuni, Grammy-nominated afro roots music star and humanitarian activist. Food Tank is a 501C3 non-profit and a large percentage of your VIP ticket is tax-deductible.

This event will sell out quickly (we have a giant waitlist every year so please do not wait to purchase tickets). More speakers will keep being added to feel free to keep checking back. Limited full and partial general admission scholarships available. Please fill out the application form here: https://foodtank.com/nyc-application. For related questions, please contact mariah@foodtank.com. Press passes can be requested by emailing Bernard at bernard@foodtank.com. NYU faculty and students can request complimentary tickets (limited number) by emailing Jane at jane.sullivan@nyu.edu. Hunter faculty and students, as well as high school teachers, can request their tickets by emailing Alexina at alexina@nycfoodpolicy.org.

Food Tank is building a global community for safe, healthy, nourished eaters. We aim to educate, inspire, advocate, and create change. We spotlight and support environmentally, socially, and economically sustainable ways of alleviating hunger, obesity, and poverty and create networks of people, organizations, and content to push for food system change.