As part of a growing focus on food policy, large organizations across the United States are developing initiatives to reduce food loss and food waste. At the Second Annual NYC Food Tank Summit, Julia Moskin, Reporter for the New York Times, moderates a discussion with Roy Steiner, Managing Director for Food at The Rockefeller Foundation, and Rhea Suh, President of the Natural Resources Defense Council, about why working on these issues is so important.

“We send messages in our society that ‘what I do doesn’t really matter,’ and that’s just false,” Steiner says.

To feed a growing planet, increasing food production isn’t the only solution. Society can substantially reduce the need for increased food productivity by decreasing food loss and food waste—and every eater can take action to contribute to this. Currently, 40 percent of food gets wasted, globally. This translates to 330 pounds (about 150 kilograms) per person per year, on average.

“It can take 10 years to get maize to give you a 15-percent increase in productivity,” says Steiner, who previously worked in plant breeding. “And in one year you can get a 15-percent reduction in loss,” by implementing food loss mitigation strategies.

Food loss and food waste are not the same, Steiner clarifies. Food loss refers to the loss that happens from the beginning stages of growing on the farm to the wholesaler or retailer. Some of it is spoilage, and some of it is edible produce that does not meet market standards of appearance. And as Chef Dan Barber notes earlier at the Summit, many parts of plants grown never get eaten despite the fact that they can be edible. For example, only the floret of a broccoli plant is harvested, but the stalk and leaves that make up a majority of the plant could also be used for food and nourishment.

Food waste, on the other hand, refers to food that made it to market, but doesn’t get eaten or used by either the retailer or consumer due to spoilage or non-use.

Rhea Suh shares that the NRDC is working with the Mayor’s office in Denver to reduce food waste at the municipal level. “Opportunity at the city level is not necessarily regulation,” she says. “The opportunity in cities that I see is connecting, perhaps to the consumer…in a meaningful way.”

On many packaged foods, “The expiration dates are completely meaningless” and often lead to consumers prematurely throwing out edible food. In the future, Suh thinks there could be some more food labeling on the Federal level and she believes that labelling can help to change behavior.

Watch the full fireside chat with Roy Steiner and Rhea Suh, above. 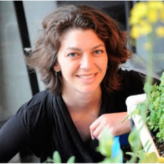 Elisha Goodman is an organic farmer at heart, transplanted to the city where she works as a strategist on sustainability, food, waste, and economic and community development. She spent seven years as an organic farmer in Hawaii and a year in the High Desert of Arizona teaching people to grow food organically in low-water conditions. She also is co-founder of Maa-Bara, a social enterprise that took aquaponics overseas to Africa. Most recently, she conducted research and writing for the World Bank on water saving agricultural technology. She holds a Master in City Planning from MIT and is a certified Permaculturist. You can connect with her at https://www.elishagoodman.com

Is the Future of Meat Slaughter-Free?