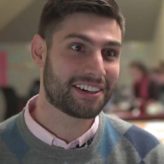 Ben Simon is a serial social entrepreneur and Founder and Executive Director at Food Recovery Network. FRN unites students at American colleges to fight food waste and hunger by recovering surplus food from their campuses that would otherwise go to waste and donating it to hungry people. Ben founded FRN in Fall 2011 while a student at the University of Maryland, College Park. FRN is now at over 110 colleges, has donated over 450,000 meals to hungry Americans, and was featured in The New York Times, Washington Post, MSNBC, and Upworthy. Ben is an ABC News/Univision Top 10 Social Entrepreneur of 2012 and was awarded a Do Something Award on VH1 for his service. Ben is also a Co-Founder of Hungry Harvest, a social enterprise that sells surplus produce for bargain prices. When not recovering food, he enjoys Settlers of Catan, pick-up volleyball, and cooking with his girlfriend.

Food Tank recently had the opportunity to speak with with Ben Simon of the Food Recovery Network, who was one of the speakers at the 2015 Food Tank Summit.

According to guest author Ben Simon, founder of the Food Recovery Network, preventing food waste is good for the environment – and for business.