Home » Hunger » Weeds Make Their Way from Garden to Gourmet

Common weeds that gardeners spend time and money combating may soon be finding their way into kitchens. The rise in popularity of incorporating plants commonly thought of as weeds into culinary repertoires is thanks in large part to recent interest in foraging. Noma, a Danish restaurant whose menu is crafted around locally foraged edibles, has solidly held a top spot as one of the world’s best restaurants for the past eight years and boasts two Michelin stars. Integrating herbage such as dandelion and stinging nettle into diets not only fosters biodiversity of gardens, but may also be a way to enrich meals with unique flavors and valuable nutrients.

The idea of weeds as food has steadily been creeping into mainstream discussions of sustainability, farming, and nutrition. This past February, weeds made it to the main stage of the TEDxManhattan Changing the Way We Eat event, where corporate attorney-turned-weed forager Tama Matsuoka Wong expounded on the environmental and health benefits of regularly incorporating weeds into one’s diet. In her presentation, “How I Did Less and Ate Better, Thanks to Weeds“, Wong claimed that “weeds are the ultimate, opportunistic, sustainable plants.” She places the cultivation of weeds as food in direct opposition to the nutrient-depleting monoculture systems currently dominating agricultural landscapes. Weeds naturally exist among and alongside other species, and with their presence, biodiversity of the growing area is often increased, and the soil subsequently enriched.

But how do they taste?

Apparently, good enough for the tastemakers at the James Beard Foundation (JBF). Wong’s cookbook Foraged Flavor was a nominee in the category of “Vegetable-Focused and Vegetarian” for this year’s JBF Awards. “I wanted to eat things that were not just edible, but delicious, and that’s how I thought about taste, and that’s how I started working with chefs,” she says. Many of the weeds featured in Wong’s recipes have surprisingly familiar flavors. The U.S. Department of Agriculture (USDA) classifies Alliaria petiolata as a “Noxious Weed”, but it tastes like garlic, as its common name “garlic mustard” implies. Wong uses the weed in a number of recipes, including Garlic Mustard Oil with Red Pepper Flakes.

For those who think of weed foraging as an activity relegated to rural landscapes and suburban gardens, think again. Becky Lerner, the author of Dandelion Hunter: Foraging the Urban Wilderness, was recently quoted in The Oregonian saying, “In 10 city blocks, I can make use of 30-plus plants.” Lerner values weeds for not only their hardiness and flavors, but also for their nutrient content and medicinal uses. Dandelion greens, when eaten raw, are rich in vitamins A and C, and also high in fiber.

As people continue to search for new ways to improve health and enliven traditional dishes, interests in foraging and the use of plants typically considered ‘weeds’ will likely continue to grow.

Digging up the dirt on our food system: Wenonah Hauter discusses new book at book signing 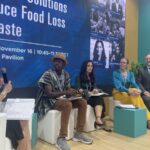