Dating back to before the Soviet Union, Russia’s dachas have long been a vital part of the country’s food supply chain. Now, however, the traditional countryside properties may fall to supermarket shine and westernized attitudes.

For centuries, much of Russia’s food supplies came from the small family-owned plots called dachas: Dacha residents cultivated potatoes, carrots, beets, vegetables, and fruits when they were too expensive or otherwise unavailable. With neighboring farms selling dachas meat and dairy, dachas often were self-sufficient, despite their small size of usually less than half a hectare.

Since the 1993 land reforms, which allowed for purchase of land from the previous communist public ownership, the number of dachas has increased steadily, with 59 percent of all Russians claiming to own one.

Studies from Gallup International claim, however, that the majority of dacha owners have reduced the farm work on their land. Instead, they use the village home as a retreat for themselves and their extended family. Ninety-four percent of dacha owners claim to do garden work; yet, only 32 percent cultivate more than half of their own food supplies. Totally, dachas accounted for 40 percent of Russia’s food output in 2011, which is a decline compared to previous decades for the nation that traditionally feeds on the smallholdings’ yields.

Sixty-five-year-old Anna Ivanovna from Yaroslavl (250 kilometers northeast of Moscow) said she recognized the trend of reduced food self-sufficiency in her sons’ behavior. Her family cottage, located in a colony-like ensemble of dachas, is about a 45-minute bus ride from Yaroslavl.

During the summer months, the primary school teacher grows about 20 sorts of vegetables and fruits on her land; yet, Ivanovna claimed, her sons consider the family’s dacha a holiday home rather than a means to food production. “This generation is different. They don’t do gardening; they wouldn’t even know how!” she explained.

Due to the declining level of food self-sufficiency, sales in supermarkets have been increasing proportionally. Russian economists consider that a sign of growing consumer confidence and higher living standards. However, according to Bloomberg, the population’s increasing demand for industrialized food might not be sustainable in times of food scandals and the falling exchange rates of the Russian ruble. 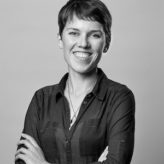 Katharina has a professional education in photography and graduated in European Studies, a comprehensive degree on politics, economy and culture. During her internship in beautiful Costa Rica, she dived into the field of sustainable development and social movements promoting new approaches to life. Her interests are politics, new-work-issues, her little garden and – of course – photography.
Previous Article