Food Tank recently had the opportunity to speak with Bettina Stern, the Co-Founder of Chaia. Chaia is one of the sponsors of the Food Tank Summit.

Food Tank (FT): What initiatives have you launched recently, or are planning to launch, that will further your company’s sustainability efforts?

Bettina Stern (BS): About one-third of all food produced around the world is lost or wasted in food production—about three trillion dollars’ worth. In calories, that means about one in four calories intended for human consumption goes to waste. In the United States, organic waste is the second highest component of landfills, which are the largest source of methane emissions. Methane is 21 times more potent than carbon dioxide as a greenhouse gas. Food waste that goes to landfills breaks down anaerobically and produces methane gases. Environmentally, Chaia focuses on local ingredients for sustainability reasons, but everything in our shop—from the food to the plates, cups, and forks—is compostable. Anything we hand to our customers is meant to be discarded in our shop’s waste bins, where we have it picked up and transported to an industrial composting facility in Prince George’s County.

FT: What drives you and your company to push for sustainability?

BS: Chaia is aiming to be on the right side of change by creating a better food system: combining local sourcing with good business practices. We partner with local farms and local producers to source our vegetables, our beverages (alcoholic and non-alcoholic), and other ingredients. Our goal is to [have] a triple bottom line mission (people, planet, profit). At this point, that’s akin to patient capitalism, but we believe—as do our strategic investors—that this model has a far reach because today’s consumer is hungry and willing to support doing the right thing.

FT: What is the biggest food related issue facing our planet right now? How is your company working to solve that problem?

BS: Want to save the environment? Eat more plants. Meat is a very carbon-intensive commodity. Ditching meat is more important than buying local. Meat production requires so much water it’s hard to fathom. One pound of potatoes takes 99.6 percent less water to produce than a pound of beef and 97 percent less than a pound of chicken. Our restaurant, Chaia, is 100 percent plant-based.

FT: Do you have any enlightening stories to share of collaboration between your business and other businesses or organizations that have changed your business practices?

BS: I’ve been asked before if any of our investors balked at the idea of a socially-responsible, triple bottom line taco shop. Quite the opposite, it actually made several PE advisors more excited about our venture, as they realized the model is attractive to consumers that fit our demographic.

FT: What changes would you like to see from the U.S. government to support sustainability in the food system?

FT: What was a turning point in your company and why?

BS: Within weeks of our first farmers market pop-up, we knew our concept “had legs.” Initially unsure that consumers would be excited about seasonal vegetable tacos, we were delighted to be named “one of D.C.’s top tastemakers.” When you eat food in season, you’re eating it at the peak of flavor. It’s also more affordable because it’s in abundance. Once we got through an entire year’s worth of serving locally-grown produce outside under our white 10-by-10 tent, we knew we had to begin to build out our business plan and open up the first brick and mortar. We opened our doors in Georgetown in November 2015.

FT: What three things do you want your customers to know about your company?

BS: Chaia is a female-powered fast casual. We are a women-owned business, and we make an effort to partner with a majority of other female entrepreneurs and business owners. Even our restaurant space was designed by a local female architect, as well as our menu boards and other touches were created by a female graphic designer.

As eaters and consumers, we can do a LOT to change the situation. Food waste is a solvable problem. Chaia is making every effort to do our part to help save the planet.

The starting wages of a Chaia employee are notably higher than the D.C. minimum wage. This is the reason we are able to hire and retain such incredible staff.

Lani Furbank is a writer and photographer based in the D.C. metro area, where she covers the intersection of food, farming, and the environment for local and national publications. She studied broadcast journalism and environmental studies at James Madison University, and is passionate about increasing access to nutritious food in communities around the world and supporting small-scale farms through mindful food choices. Find her on social media: @lanifurbank 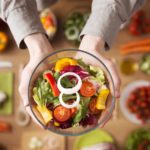 Our Changing Menu Launches Awareness Campaign About the Climate Crisis
Get Involved
Registration is disabled.