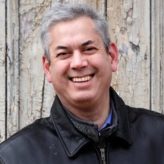 Samuel Fromartz is a veteran journalist who focuses on the intersection of the food, agriculture and the environment. He is a co-founder and Editor-in-Chief of the Food & Environment Reporting Network (FERN) and author of In Search of the Perfect Loaf: A Home Baker’s Odyssey (Viking 2014) and Organic Inc.: Natural Foods and How They Grew (Harcourt 2006). His articles have appeared in Fortune, Business Week, The New York Times, The Washington Post, and The Nation, among other publications. In 2011, he helped launch FERN, which has grown quickly to become a journalistic presence in the world of food and agriculture reporting, distributing articles though more than two dozen media partners.

Food Tank spoke with Sam Fromartz from the Food and Environment Reporting Network, who will be speaking at the Food Tank Summit in Washington, D.C.

Food Tank recently had the opportunity to speak with Sam Fromartz, who was one of the speakers at the 2015 Food Tank Summit.