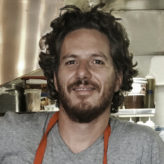 Spike Mendelsohn is a chef, philanthropist, and television personality based in Washington, D.C. Spike graduated with honors from the Culinary Institute of America and is an alumnus of the Chef Action Network. As a celebrity chef, Spike has appeared on international media outlets, including Bravo TV’s Top Chef, the Food Network’s Iron Chef America and The Rachael Ray Show. Spike is known for his restaurants Good Stuff Eatery, Bearnaise and We, The Pizza in D.C. and Sunny’s in Miami. Currently, Spike serves as the Chairman of the D.C. Food Policy Council, Chef Ambassador to CARE International and Chef Contributor to DC Central Kitchen.

Food Tank spoke with Spike Mendelsohn, Chef and Chairman of the D.C. Food Policy Council, who will be speaking at the Food Tank Summit in Washington, D.C.