In 2014, International Union for Conservation of Nature (IUCN) deemed the European eel (Anguilla anguilla) critically endangered. The number of baby eels returning to inland waterways has declined by 90 percent over the past 45 years, and some eel experts believe their very survival is at stake.

Andrew Kerr of the United Kingdom’s Sustainable Eel Group (SEG) puts it into perspective. “According to the IUCN, when you put something into the critically endangered bracket you’ve gone above levels of endangerment that apply to the snow leopard or the tiger—the same level as the panda.”

Eels may not be as cute as pandas, but they have long been part and parcel of thriving ecosystems in their habitats, which range from fresh to salt water.

Current research about their life cycles is very incomplete. The eels breed somewhere in the Sargasso Sea, a portion of the Altantic Ocean bordering Florida and several Caribbean nations. Their offspring drift as larva across the Atlantic to estuaries and rivers in Europe and North Africa where they metamorphose, first into glass eels, then into small elvers who make their way up waterways to become adult eels. They eventually make the 4,000-mile journey back to the Sargasso Sea to spawn. Marine biologists cannot account for their habitats or migration patterns during these epic journeys.

He and the SEG are trying to prevent the European eel’s total collapse by working to control overfishing and opening blocked migration pathways.

Here’s how Kerr explains it: “Firstly, we are totally in favor of human beings enjoying the eel in culture, the food, everything else about eel—and for human beings to enjoy them in a modern, sustainable way, so we’ve developed the Sustainable Eel Standard. It was created by many of the leading eel scientists and conservationists. It’s in its fifth iteration, and we are seeking full third party accreditation. It’s very much modeled on the Marine Stewardship Council (MSC) approach. MSC is the blue label. We tried to put the eel through this process, but because the MSC is not designed for aquaculture and because the eel has this extraordinary life cycle, it doesn’t fit the MSC standard, so we had to create something unique.”

This new standard has been adopted by many eel-fishing and farming nations—about 70 percent of the European industry in nine countries.

Another large-scale initiative is the creation of eel runs, or passes, to open up waterways that have been dammed and blocked over the centuries. These have prevented or reduced eel passage to inland rivers, lakes, and ponds.

“You can divide recovery actions between long-term and those that are emergency,” says Kerr. “The long-term ones are all about the migratory byways. Given that we are on the edge, there are also emergency measures that can happen. We’ve got hundreds of millions of glass eels arriving each year on some of the Atlantic-facing rivers, yet shut out of their natural habitat. It makes sense to take some of these glass eels and move them to habitats they can’t reach, but are historically good places for eels. If you capture them in the most sensitive way, if you can store them in the most ‘eel-husbandry’ way, you can move them around with minimal mortality, say 2 or 3 percent. Then if you release them into these ideal habitats, many, many more will survive than if you leave them on the wrong side of the barriers to die.”

Over the last three years, eel runs have been up in the UK, reaching their highest levels in 30 years in 2014. However, SEG believes it’s still too early to determine if, and how, eel populations are truly building.

Yet Kerr has some guarded optimism. “It’s in its very early days, but we have made huge inroads.”

He adds, “When we have a consumer that only wants to eat sustainable eel and a fisherman who only wants to supply it, then we’ve really made a difference.”

Nicholas Vroman is a writer and cultural explorer living in Japan. He writes on food, wine, film, and more. He and his wife, Virginia Sorrells write Ajimi, a blog on food, wine, art, fabrics, music, culture and whatever hits their fancies. Nick’s film writing can be found on his blog, a page of madness. His work has appeared in the New York Times, the Japan Times, McSweeney’s, Wine Enthusiast and many other publications. His recent focus has been on issues of sustainable seafood, locavore culture and the Good Food movement in general. His most recent articles have appeared on the Food Tank website, in the Christian Science Monitor and on FamilyFarmed.org’s Good Food on Every Table blog. 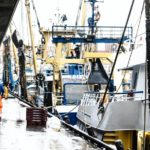 Transparency, Technology, and the Sea: The Story of Envisible
Get Involved
Registration is disabled.