While the spirit of Thanksgiving calls to mind the happiness of family and tradition, food insecurity remains a reality for many smallholder farmers in East Africa. Seventy percent of the world’s poor live in rural areas and depend on agriculture for their livelihoods. These farmers and their families lack access to the right tools and techniques to improve their harvests, and are highly susceptible to environmental shocks. They can suffer months of hunger and meal-skipping if their harvest is poor.

Here, smallholder farmers in Kenya, Rwanda, and Tanzania tell us in their own words what it’s like to grapple with food insecurity, and share their favorite dishes to cook from the crops they grow.

“My grandmother always told me that the best way to make my family happy and strong is by providing them with delicious meals every day,” Imelda says.

Now a mother of seven, Imelda Nyongesa frequently prepares pumpkin leaves, a family favorite and a traditional dish in Kenya. Pumpkins are nutritious, cheap, and easy to grow, so Imelda has pumpkin patches scattered throughout her land.

“I make sure I cook a lot before they arrive home for lunch during the school day.” Imelda says. In the evenings, Imelda often serves pumpkin leaves alongside ugali, a maize porridge dish that is firmly rooted in Kenyan culture.

Before enrolling with One Acre Fund in 2012, “I had given up on farming.” Imelda says. “I saw no need to waste my time and energy every season only to come out empty handed.” Since enrolling with One Acre Fund, Imelda has consistently harvested enough to feed her children for the whole year, and even purchase three solar lamps that allow her children to continue studying at night.

1. Peel the leaves to remove the outer string-like layer.

2. Wash and cut the peeled leaves into small pieces.

3. Boil the pumpkin leaves for about seven minutes.

4. Fry the boiled leaves with onions, tomatoes, or any other ingredient of your choice.

5. Add fresh or fermented milk to improve the taste (optional).

7. Let the vegetables boil for another five to seven minutes.

8. Serve while hot with bread, ugali, potatoes, or any other dish!

Like other farmers in her village, Emerithe’s family largely eats what she grows, which includes beans, maize, cassava, and sweet potatoes. She says that providing her four children with nutritious meals is one of her primary responsibilities. “I cook for my children’s health!” she says.

Several times a week, Emerithe makes a mixture of beans, maize, and cassava. This traditional combination, or imvange in Kinyarwanda, is her absolute favorite meal because it reminds her of childhood. “When I was ten years old, I used to sit around the fire and watch while my mother was cooking.” Emerithe says.  “Then, when I was twelve, I started cooking by myself, imitating my mother.”

Emerithe has been farming with One Acre Fund since 2012. Before joining One Acre Fund, her bean harvest would feed her family for only a month or two. Now, Emerithe’s improved harvests provide food year-round and she’s even been able to purchase medical insurance for her children.  In the future, Emerithe plans to educate all of her children.

“To cook beans, maize, and cassava, it’s a process,” says Emerithe. Preparation can take over four hours, but it’s worth it.  “It’s a delicious food!,” Emerithe says.

1. Put water and maize in a pot, then bring to a boil.

4. Peel cassava and add to pot.  Boil together for an additional 90 minutes.

5. Drain the water and serve, adding salt to taste.

As Jerida’s children return home from school at midday, they crowd the table in anticipation of their ugali lunch.  Ugali is a maize-based porridge that is a staple in East Africa. “When my children eat ugali at lunch, they can stay strong until late in the evening,” she explains.

Providing her children with the sustenance they need to focus in school is part of Jerida’s long-term plan to give her children the education they deserve. However, Jerida wasn’t always able to plan for the future. Before enrolling with One Acre Fund in 2012, her harvest would not last through the year, and having ugali at every meal was not a guarantee.

Having learned to make ugali with her mother as a young girl, the process is very special to her. “My mother used to tell me to watch when she was cooking,” she says. “Ugali is the food that touches my heart.”

1. Heat half a liter of water until the water boils.

2. Add a handful of maize flour to the boiling water.

4. Pause the stirring for 10-20 seconds to allow the ugali to cook.

5. Repeat stirring and pausing until a thick consistent mixture is formed.

6. Let the ugali rest on fire for about three minutes—or until the smell of baking ugali fills the air.

7. Turn the ugali onto a serving plate.

8. Serve the ugali while hot. Ugali is commonly eaten with stews of vegetables, fish, beef, or chicken.

Brianna is a recent graduate of Bucknell University. She was a Fall 2015 HungerU Crew Member and is now currently interning at One Acre Fund. Brianna hopes to contribute to the future of food through a career in food law and policy.

Oregon Uses Schools to Move the Needle on Regional Food 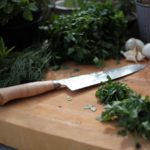