The Berman Law Group has filed a class-action lawsuit against several defendants for the health impacts and property damage said to be linked to smoke and ash residue (known as black snow) from the sugar field burning in the Florida Everglades. The list of defendants includes the U.S. Sugar Corporation and Florida Crystals Corporation. On behalf of affected residents, the Berman Law Group is holding the defendants accountable for a number of counts, including negligence and medical monitoring.

Pre-harvest sugar field burning is an agricultural practice that burns and removes the outer plant matter that is not utilized in the sugar harvesting process. This method minimizes the bulk and weight of the product transported from field to mill.

Every year, the Florida sugar industry burns about 400,000 acres, an area the size of Houston, of sugarcane. According to the U.N. Food and Agriculture Organization, our changing climate is increasingly threatened by large-scale fires. Nonetheless, agriculture remains the common denominator between the sugarcane field fires in Florida and the fires in other biologically-rich places such as the Amazon.

Burn permits are allowed in four major Florida counties—Glades, Martin, Hendry, and Palm Beach. According to Patrick Ferguson, the Sierra Club organizer of the Stop the Burn Campaign, the Florida Department of Agriculture and Consumer Services (FDACS) determines wind regulations and prohibits the sugar field burning when currents blow towards predominantly white neighborhoods. Ferguson explains to Food Tank that “it is the state’s most disenfranchised and vulnerable who are bearing all the weight of the negative impacts from burning while the sugar industry rakes in ever-higher profits.”

While some defendants of the lawsuit have issued a couple of statements defending the safe and regulated nature of the sugar field burning, plaintiffs and community activists claim that there is a safer and more cost-effective alternative. Ferguson tells Food Tank that a modernized and sustainable approach, called green harvesting, converts the normally discarded plant matter to valuable products, such as mulch, ethanol and tree-free paper. “The industry cites added transportation and processing costs associated with green harvesting but neglects to consider the value of the unburned trash,” says Ferguson.

Although they are not affiliated with the lawsuit, Ferguson tells Food Tank that the consistent activism of the Stop the Burn Campaign over the last four years may have brought the issue to legal consideration. They are advocating for green harvesting and sharing success stories of green harvesting projects abroad.

Kina Phillips, a Glades resident and campaign leader, informs Food Tank of her medical experience and firsthand look at the increase in health-related problems, such as asthma and cancer, during the burning season. “We are not just sugarcane consumers, we are their neighbors.”

As a campaign leader for four years, Phillips is driven by her desire to create a stable and permanent home in the Glades for her kids, grandkids, and future generations to come. “You don’t have to accept things for the way that they are. You don’t have to have a title to fight for justice,” Phillips tells Food Tank.

Phillips informs Food Tank that residents are not against the sugar industry being there, but that the industry can do better for the community. “It’s right in our backyard. We are the ones that are breathing all of that in…If we bring in green harvesting, we’ll be able to bring in more jobs and consider the people.” 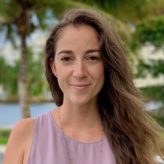 Meet the Chef Serving Up Pork Schmaltz in Appalachia