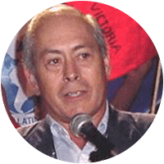 Food Tank spoke with Baldemar Velasquez, the Founder of the Farm Labor Organizing Committee, who will be speaking at the Food Tank Summit in Washington, D.C.

Food Tank recently had the opportunity to speak with Baldemar Velasquez, from Farm Labor Organizing Committee.