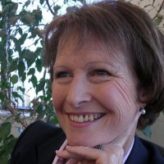 At the FAO Office in Washington DC, Barbara Ekwall leads work on partnerships, communication and outreach and represents FAO in conferences and meetings in the U.S. and Canada.

During her international career in international cooperation and human rights, Barbara held several managerial positions: among others, she set up and led FAO’s work on the right to food in Rome, Italy and, in the Swiss Ministry of Foreign Affairs in Berne, Switzerland, coordinated work related to FAO, ECOSOC and UN development. She also was Secretary-General of the Swiss Holocaust Fund in Berne and, prior to that, headed the office of international affairs and human rights at the Lutheran World Federation in Geneva, Switzerland.

Food Tank recently had the opportunity to speak with with Barbara Ekwall, of the U.N. FAO, who was one of the speakers at the 2015 Food Tank Summit.