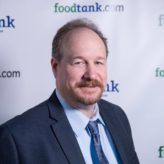 Jason Huffman is the editor of POLITICO Pro Agriculture and Pro Trade, where he supervises a talented team of nine journalists. He has been covering food policy for more than eight years, including time spent as the editor of Food Chemical News. Jason grew up in a rural part of Pennsylvania, not far from the Maryland line, working summers for his grandfather and uncles in their respective hay, straw and fertilizer businesses. He is a Lycoming College graduate, married and has two children. He is a diehard Baltimore Orioles and Ravens fan.

Food Tank spoke with Jason Huffman, the Agriculture and Trade Editor for POLITICO Pro, who will be speaking at the Food Tank Summit in Washington, D.C.

Food Tank recently had the opportunity to speak with Jason Huffman of POLITICO, who was one of the speakers at the 2015 Food Tank Summit.