Apeel Sciences is rolling out Edipeel, a product for fresh food growers and retailers made entirely from extracts that are found in all fruits and vegetables, that provides a protective layer for fresh produce. When applied to harvested produce, Edipeel helps to maintain freshness and minimize food waste providing benefits to growers, distributors, and consumers. This completely natural method makes it possible for growers and distributors to reduce their use of chemical preservatives, reduce reliance on refrigeration, and reduce the amount of harvested produce lost to spoilage. Growers can avoid harvesting before ripeness, allowing fruits and vegetables to develop full nutrition and flavor and allowing consumers to purchase healthier, longer-lasting produce.

Apeel’s products are now approved and available for U.S. Department of Agriculture certified-organic and traditional produce, and the company is preparing to roll out the product with select citrus and avocado partners globally. Apeel has moved into a new 105,000-square-foot facility in Goleta, Santa Barbara, that will enable the company to work on different varieties of produce and fresh food partners.

Food Tank had the opportunity to talk with James Rogers, CEO of Apeel, about the problems associated with perishability, their product Edipeel, and future prospects for the company and its products. 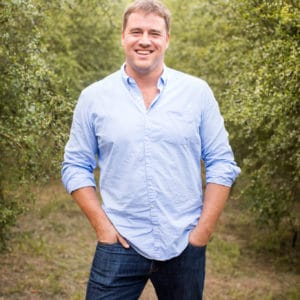 Food Tank (FT): Edipeel is made from plant oils. Where do you source your plant matter from and what do you do with the leftover material after the oils have been extracted?

James Rogers (JR): The beauty of what we do is that we can get our materials from any plant source, any fruit or vegetable. We currently use grape pressings from wineries, effluent from soup processing facilities, and materials that are left over from other forms of processing. These companies mainly use the juices and the pulp and leaves the seeds, stems, and skins. Once we get it, all the plant oils that we need are right there—but the oil materials that we want are locked up. What you would normally do with that stuff is throw it into a compost heap, and over time, heat, pressure, and bacteria would break that stuff down into the building blocks, which would get recycled back into nature. We want to get access to that stuff—so we accelerate the composting process.. Then our job is to separate and purify those individual components that are required in our product— which are different types of oils. There are other important materials in there, and other opportunities for products in those materials, but currently we just put those back into the ground as green waste.

FT: Your company is helping to confront the issue of food waste by preserving produce longer. What other issues do you see with our food system and how do you think they can be addressed?

JR: All fresh produce is seasonal and perishable, which means you are either in season and you have huge supply and surplus of this food, or you’re out of season, and you have no supply and an absence of produce. Taking a step back to think about this, this obviously isn’t a new problem—it has been happening for a long time—how have other organisms solved this problem? How have humans solved this problem in places where we don’t have hunger problems? The way that some animals solve this problem is that they migrate, they move around according to the season and they identify and they move to new food sources. Seems, however, that the way that humans have solved this problem is rather than migrating, we’ve developed trade.

The challenge with trading food is that food is a perishable asset, which means it has a certain shelf life. The irony here is that the value of the produce that you are producing is linearly related to the distance that you are able to transport it. For example, three smallholder mango producers farmers in Kenya, if each has 1,000 mangos—we can’t trade each other mangos. The value of the mango comes in giving it to someone that doesn’t have mangos. Because the produce is grown regionally, to generate value from that piece of produce, you need to be able to transport it far enough away that people don’t have access to that product in the place where you are selling it.

FT: Part of Apeel’s work focuses on the developing world. How do the issues of food waste and preservation differ in less and more developed countries?

JR: The interesting thing is that it is the same, but it is just a different scale. The inherent perishability of food is felt more painfully in emerging countries that lack a cold chain.

Back to our example of mango smallholder farmers in Kenya: they are growing something that is inherently valuable, and because they don’t have the cold chain infrastructure to support the distribution of that produce, they have a much narrower window around which they can distribute that produce. This limits the economic value that they can capture from that produce. The challenge is exactly the same in developed economies. Take the value of growing an apple in Washington State: that apple is less valuable in Washington State than in China or Mexico. So it again is related to the transportability of that produce.

The reason that difference in scale is magnified is because of the cold chain. The infrastructure required to reduce perishability is refrigeration—the only tool that we really have in our toolset right now. Because of the amount of infrastructure investment in developed countries by the government, we have had the ability to develop this cold supply chain, which means that from the time the produce is picked, as soon as possible after harvest, the temperature is reduced and maintained at those low levels until it ultimately reaches the end consumer. And there should be no breaks in that chain from harvest to the end consumer.

In the developing world, there is no cold chain. And because there has not been the infrastructure development necessary to underpin this cold delivery chain—you need roads, you need electricity grids, and capital equipment to do the refrigeration—the radius of distribution is much smaller. In those places where the infrastructure has not been developed, the distribution radius is smaller, and hence the opportunities for capturing the economic value are dramatically reduced. The difference between developing world economies and developed economies is really the establishment of the underlying cold chain.

FT: You have an extensive background in science and actually founded Apeel while working on your PhD in Materials Science at University of California, Santa Barbara. What have you learned from your experience of translating basic research into a viable commercial product?

JR: This is probably one of the best questions I’ve had the chance to respond to. It’s really tricky. What I’ll say is that when I started the company, I didn’t know this would work. Theoretically, this should work, but there was no evidence to support it. No one had done the tests; no one had done the development. The most valuable thing that I think I’ve learned in translating this is that it’s almost the definition of the problem. Having the right problem to solve is almost more important than having the solution. I came to recognize in my PhD work, that I was digging really deep into solving a problem that somebody else had outlined.

FT: Apeel is growing quickly, with a new facility in Goleta, California, adding tenfold to your space. Which direction is your company heading in? What do you hope to accomplish in the near future?

JR: What we have set out to do as a company is to use food to deliver food to consumers which is healthier, heartier, and more nutritious, lasts twice as long in their home, and is ultimately grown without the use of traditional pesticides. That is where we are going. The reason that we are moving into the new facility is so that we can execute on that big vision. By moving into our new 105-square-foot facility space, which has 20,000 square feet of wet lab space, we’ve given our team the physical resources necessary to deliver that vision.

Now in the short term, we are releasing our product for avocados, which is used by food producers. The reason for this is because of the stereotypical joke about avocados. Not ready yet, not yet, not yet, now it’s too late. With our product, we can dramatically extend the shelf life of avocados.

I’m so encouraged by the amount of attention food waste has received, and rightfully so, because I think that improving the efficiency with which we utilize our food sources is the fastest and most efficient way for us to move the needle on how we are taking care of the planet.

McKenna is the Editorial Director for Food Tank. She holds an M.A. in Food and Agricultural Law and Policy from Vermont Law School and a B.S. in Public Communications from the University of Vermont. She currently resides in Ludlow, Vermont and enjoys yoga, snowboarding, hiking, and swimming in her free time.