A new report indicates that better farmland soil management may be able to sequester the same amount of carbon as emitted globally by the transportation sector. The study, a collaborative effort by the International Center for Tropical Agriculture (CIAT), The Nature Conservancy, and the Chinese Academy of Sciences (CAS), examined global soil samples and developed sequestration potential maps that can assist in developing mitigation strategies for reaching the targets set out in the Paris Climate Agreement.

“Our findings show that turning soils into carbon sinks can sequester significant amounts of carbon in cropland soils,” says lead-author Dr. Robert Zomer, Kunming Institute of Botany, Chinese Academy of Sciences. “Our research shows soils can be part of the solution to combat climate change—and by doing so we also can improve soil health.” 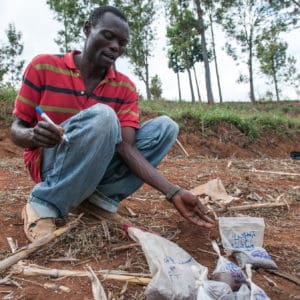 The report, Global Sequestration Potential of Increased Organic Carbon in Cropland Soils, was published in the journal Scientific Reports. The authors indicate that soil has the potential to trap up to 1.85 petagrams (2 billion tons) of carbon annually, with the greatest opportunities in croplands that already have extensive soil management, like the United States and Russia. Recommended practices to improve soil sequestration include using compost or manure, mulching, zero tillage, cover cropping, and agroforestry.

“Regenerating soil organic carbon is a foundational strategy for conservation, through which we can provide food and water sustainably and help tackle climate change,” says Dr. Deborah Bossio, Lead Soil Scientist, The Nature Conservancy. “Analyses like this help us understand the importance of soil management for reaching climate goals. The question now is: how can we unlock this potential?”

Soil may have this potential to store carbon because 50 to 70 percent of soil carbon has been released into the atmosphere since the industrial revolution began. However, there are limits to the amount of carbon soil can hold making this a temporary way of mitigating climate change. The study indicates that the greatest gains will be seen in the first 20 years under different cropland sequestration models. A long-term benefit would be improved soil fertility, better water retention, and generally greater resilience in the food system.

Julie Kunen Discusses the Food Revolution in the Amazon