According to the United States Department of Agriculture, Americans throw away more than 60 million tons of food each year, much of it ending up in a landfill. The Environmental Protection Agency estimates that about 20% of U.S. methane emission is traceable to landfills, which, in turn, contributes to hastening climate change. Recognizing this problem, many restaurants have committed to limiting their food waste, turning otherwise wasted food scraps into great tasting meals for their customers to enjoy.

The Root Café in downtown Little Rock, Arkansas, is one such restaurant. Located in the South on Main (SoMa) district of Arkansas’ capital city, The Root Café has served locally sourced breakfast, lunch, and dinner to an often-packed house since 2011. The Café also hosts community events, including a hot-pepper eating contest, and movie nights for city residents. Whenever possible, the restaurant maximizes their cabinet contents by incorporating food scraps, and what would otherwise be considered food waste, into their dishes. Much of the rest goes to a local farmer who uses the scraps to feed the farm’s pigs.

The Café’s efforts have found support from both residents of Little Rock and granting organizations. A few years ago, The Root Café received a US $25,000 grant from the viewers of the HLN TV network’s  “Growing America: A Journey to Success,” a documentary series. And, more recently, The Root Café received US $150,000 from the Chase Bank Mission Main Street Project, allowing them to add a dining room onto their existing structure and begin serving dinner.

Food Tank had the opportunity to talk with the owners of The Root Café, Jack and Corri Sundell, about their restaurant, the local food movement in Arkansas, and turning food waste into delicious meals.

Food Tank (FT): Why did you start The Root Café?

The Root Café (RC): I had always dreamed of opening a cafe, and then later got interested in agriculture and local food systems during my time in the Peace Corps in Morocco. When I returned to the United States, I interned in the livestock program at the Heifer Ranch in Perryville, Arkansas, (a Heifer International Learning Center) and also started cooking a lot. When I moved to Little Rock after my time at Heifer, I saw a burgeoning interest in local foods, and it felt like the right time to bring all of these interests together under one roof. After a three-year startup period that we spent raising capital and getting to know farmers in the area, we finally opened The Root Café in the South Main neighborhood of downtown Little Rock.

FT: How have you seen the local food movement in Arkansas grow?

RC: The concept of local foods has grown exponentially since I’ve been paying attention to it, starting around 2006. I read recently in an article that in the 10 years between 2005 and 2015, the number of farmer’s markets in Arkansas tripled, from somewhere in the 30s to almost 100. Local foods have become a lot more mainstream, and I find that I don’t need to explain our reasons for sourcing locally nearly as much as I used to when we first opened. I think this isbecause of better access to local foods through farmers’ markets and other direct sales, more restaurants, retail outlets offering locally sourced products, and better education on the part of consumers who are asking questions about where their food comes from. I don’t think this is a trend that will pass in a few years, but a new lifestyle choice that a lot of people are embracing.

FT: What is The Root Café most excited for this year?

RC: We recently started serving dinner at the Root, so that’s a new thing for us and very exciting. I’m also really excited to work on improving our customer service and our engagement with the community. We have spent the last two years undergoing a major expansion project that was funded through a grant we received from Chase Bank called Mission Main Street. It’s all been really exciting, but I’m ready to go from a period of growth and transition to a period of honing our craft, learning to utilize our new space fully, and getting feedback from the community about what next steps they would like to see in the evolution of the Root.

FT: What are some recipes and tips that you can give to people wanting to turn their ‘food waste’ into meals?

RC: Stock is really the classic example of this in my mind, and we do a lot of this at the cafe. We make a curry chicken salad that we serve during lunch, and that leaves us with the whole carcasses of about 12 chickens a week. We break these into smaller pieces, cracking some of the larger bones with a cleaver, and then put them into a large pot with one onion cut in half, a couple of carrots cut into pieces, bay leaves, whole peppercorns, whole allspice, and just one or two whole cloves.

We cover this with water by a couple of inches and then bring to a boil, skimming any foam or scum that forms on the top. We let it simmer for anywhere from three to five hours, then strain it through a colander and then through a fine-mesh sieve. If we’re not using the stock in a soup that week, we put it in quart jars and pressure can it so that our customers can take it home and use it.

A couple of important stock-making tips:

FT: Any others recipes or tips for Food Tank readers?

RC: Another easy way to reuse ingredients is to turn last night’s dinner into a casserole or a pasta bake. For example, if you have leftover spaghetti from last night, some roasted vegetables from two nights ago, and a ripe tomato sitting on your counter, just chop up the tomato, grate a little cheese, throw that all into a casserole dish with the pasta and veggies. Then pop it in the oven until it’s heated through and the cheese is nicely melted. Voilà—you’ve got a delicious new meal for the whole family!

Likewise, you can use previous nights’ leftovers to make soup. Just think about what things need to cook before the soup is done versus what things are already cooked and just need to be heated, through. Some things might need to be chopped differently to make sense in a soup, or you might want to chop the spaghetti to make it easier to eat in casserole form, but you just play with it and figure out what makes sense for whatever you’re doing.

FT: As families consider how to integrate your top tips for turning ‘food waste’ into meals, what challenges do you think people might face? What advice can you offer them so they can overcome those challenges?

RC: The biggest challenge might be fear of failure, or actually making something that doesn’t taste good, and that’s something that’s bound to happen when you experiment with food or play around in the kitchen. But it’s worth it! Because knowing how to cook—and learning enough about food to be able to be creative in the kitchen—those are both very rewarding things. And it’s a thing you get to share with your friends and family, a thing that brings people together, helps provide a sense of place and community, and adds joy and pleasure to your life and the lives of those around you! 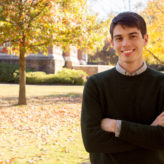 Sean Alexander is a rural development and food security practitioner, focusing on the American South. Sean is currently a Marshall Scholar at the London School of Economics and Political Science (LSE). He has an M.Sc. in Food Security and Development from the University of Reading and a B.A. from Hendrix College in Conway, AR.

The Ghosts of Feasts Past: How to Reduce Food Waste