Taylor Quinn is the Emerging Markets Director for the Silicon Valley food startup, JUST. In 2015 he saw Josh Tetrick, CEO of JUST, give the keynote speech at a conference which Quinn thought “presented a vision of business that was 30-40 years ahead of its time.” Quinn now runs JUST’s project in Monrovia, Liberia selling Power Gari, a fortified cassava porridge based on traditional gari.

Initially, Quinn’s post to Liberia was a Corporate Social Responsibility (CSR) project in education. However, after spending time, “listening and learning,” Quinn met a pediatrician who explained the aid system in Liberia. He learned that aid is available in public facilities, such as hospitals.  Quinn recalls the pediatrician saying,“I send [moms] home with their kids after I treat them and there’s no advice I can give [them] because there is simply no nutritious food available in markets […] and there is nothing that I, as a doctor, can do about it.”

This conversation was the turning point for Quinn. He researched how JUST could develop a product based on four core principles; to be nutritious, culturally relevant and delicious, affordable, and entirely based on local value chains. Two years later, they have Power Gari, a cassava porridge, based on traditional gari. Power Gari is produced in Liberia using mostly Liberian products and sold in open-air markets. 99 percent of the actors in the supply chain are women.

Power Gari is a complete meal. Cassava is one of the six or seven ingredients in their formula. Quinn mentions that Power Gari “is more expensive than regular gari [but] cheaper than the cheapest Liberian complete meal.” The formula contains soy protein and a customized vitamin mineral blend. Quinn explains JUST will “eventually [use] a plant-based protein source grown in Liberia but not yet, as there is nothing grown at a scale large enough to meet [their] demand.”

JUST works in partnership with Liberia’s Kawadah Farms, building a value chain using West African products, processes, and packaging. Quinn uses JUST’s marketing team, process engineers, chefs, and food safety team to leverage the capacity of Kawadah Farms but all major decisions are made by the Kawadah team. Quin told Food Tank, “The team is growing all the time,” there are now 130 to 140 people involved in the value chain, from market vendors to farmers.

Kawadah sells Power Gari through an “entirely market-driven approach.” This is the key difference between the Power Gari project and food aid in the region. JUST and Kawadah accept no aid money, all of their revenue comes from selling the product.

JUST is hoping to provide 7 million meals in Liberia this year, a realistic target according to Quinn. The deciding factor for this is food service to schools. The two main food service providers in Liberia are the World Food Program (WFP) and Mary’s Meals. Quinn says, “we are the leading player if those organizations’ finally take the leap to buy local food instead of imported food.” If they get the contracts, they will be on track to hit their target. 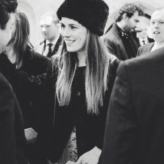 Eleanor is a former research and writing intern at Food Tank, based in London. She graduated in 2017 with an MSc in Food Policy at City University and she has a BSc in Chemistry. She has worked on a number of projects on food security, health and nutrition in the UK. Eleanor is also a Cordon Bleu trained chef and has worked in restaurants such as the Fat Duck and Noma.