Kaleidoscopic menu boards on the side of Big Box trucks with mechanical tunes signal the season of summer for many. I ate my share of ice cream like everyone else in the neighborhood, but nothing topped the rhythmic cadence of the burly man who drove the produce truck filled with watermelon. The truck wasn’t shiny or new, but its contents were filled with the promise of natural refreshment—no artificial coloring or added sugar, just water, melon, and seeds.

That memory, paired with the introduction of fresh food at a young age by my parents, sparked the dialog that would eventually fuel my journey into becoming a healthy food grower and advocate. Growing pesticide-free vegetables on a small plot of land and teaching others about the rewarding relationship between hands, soil, and seed feeds my mind, body, and soul. However, not everyone that I wanted to share my love for herbs and vegetables with frequented the markets. I wanted to serve the invisible community members, the mothers and children sometimes referenced to as “food desert dwellers.”

Week after week over the past eleven years, my family and I would travel through these communities early Saturday morning beckoning foot traffic to visit the market. On occasion, one or two family members would pass through, timidly looking at unfamiliar produce like Kohlrabi and Celeriac. Intimidated by the look and sound, they’d never appear again and risk the embarrassment of not knowing. I wanted to tell them, “come over here to my booth, I’ll tell you what that is and teach you how to prepare it.”

Food is about family, comfort, friendship, grief, fun, accessibility, and affordability. When there is no engaging dialog to entice or educate at the moment of interest, then the intrigue passes like the seconds on a clock. 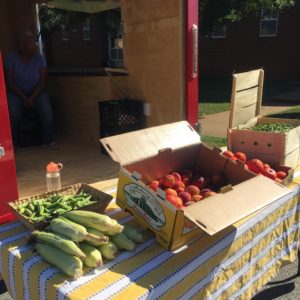 My experience with these missed opportunities required me to learn some creative distribution techniques. After researching demographics, history, culture, and per-capita income, I was armed with information and passion for introducing and feeding adults and children healthy food. The idea of a mobile produce business is by no means new, but over time it has been neglected. Resurrecting a concept that can potentially support a community with limited resources and transportation was a no-brainer for me, and Young Female Farmers Mobile Produce was born.

While reflecting upon the connection I had with the Watermelon Truck as a youth, I remembered how safe and relevant I felt because the proprietor of that business allowed me to make a decision about what I wanted to eat and could affordably purchase. I pitched the idea to the Housing Authority, acquired the necessary permits from the zoning commission and city finance department, purchased my concession-style trailer, and loaded it up with vegetables.

The vegetables chosen were traditional southern cuisine like okra and white shoe peg corn along with familiar cucumbers, squash, and tomatoes. One group of women who were cousins shared with us stories of their childhood, eating okra boiled, fried, and baked. Another person fondly remembered shelling purple hull peas in her youth and purchased a bushel. Dialog was being exchanged, memories were surfacing, and healthy food was leaving my trailer and walking through the doors of their comfort zones, and I felt like a winner.

The afternoon sun began to sting our eyes and skin, signaling the need for a departure, when three little boys around the age of seven gingerly walked over to the big red trailer hoping it had ice cream in it. The tallest of the three had five dollars to spend, and as their eyes scanned the crates of produce for something recognizable, one of the boys said adamantly “buy this,” pointing at the cucumbers.

The young man with the money asked, “Is that a pickle?” I said, “no sir, that is a cucumber but it can be made into a pickle once it sits in vinegar for a few days.” His response was “I don’t like cucumbers I only like pickles.” The third young man of the group wandered to the crate with the round red fruit, and after careful examination asked, “what are these?” With tears in my eyes, I smiled and said, “those are tomatoes, would you like to try one?” In unison they answered, “no, we’re looking for ice cream.”

Pamela Warhurst, a British community leader and activist best known for founding the voluntary gardening initiative Incredible Edible, said, “Can you find a unifying language that cuts across age and income and culture? Yes, and the language would appear to be food.”

Simple, elegant, robust, and hearty, food can be likened to a symphony; once the listener hears the melody, the dialog is like an old friend, trusty and dependable. Learned behavior is often the result of repetitive experimentation, so I personally encourage all who will listen to open their minds and palates to the idea of healthier food.

Let us make ourselves available to exchange stories, recipes, and dialog to support our communities in this fight to regain our health and culture through healthy food. Consider growing a tomato plant in a pot or grow some kale in a raised bed and share the fruits of your labor with a friend. Begin the conversation that has been missing from our inner city neighborhoods about food culture and abolish the negative terminology ‘food desert ‘from our language, while we watch what food can do. 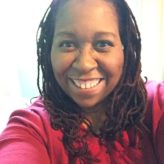 Margo Candelario is a California Native who grew up in an Agricultural community. She is a farmer, visual and literary artist, and the owner of a family business called Young Female Farmers.

Fast Company's Eillie Anzilotti: "We rely entirely too much on meat"

Emily Bachman: "What does it mean to throw something away?"