The Green Shoots Foundation has been running the Agriculture Skills in Public Schools (ASPUS) program since 2014. Recently, the Foundation organized a range of focus group discussions with secondary school students to evaluate their activities thus far and gain insight into how young people in rural communities feel about pursuing a career in agriculture.

“When exiting one of the focus group discussions, I glanced at Ratana, the Executive Director of Green Shoots Local Partner, and he had a look of amazement on his face,” said Muneezay Jaffery, Green Shoots Foundation Operations Manager. “He was pleasantly surprised by the thoughts shared by the students. For him, it was an affirmation that we are on the right track with future work in this part of Cambodia.”

The main focus of ASPUS is to introduce small-scale farming techniques within the school curriculum. To date, Green Shoots has set up gardens in 42 schools, introduced skills to almost 5,000 students, and trained 47 teachers in not only managing the gardens but also lesson planning and conducting the training. 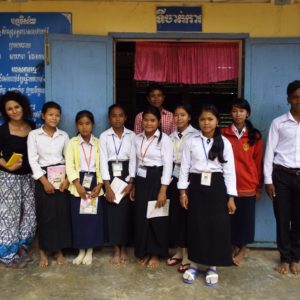 After three years of running this project, it’s imperative to consider what is next—to take stock of impact, positive and negative, and see how to scale it up. The Foundation decided to conduct a series of focus group discussions on whether Green Shoots has met aspirations of young people and how they can continue to cater to their needs. A strategy already discussed on Food Tank.

Amidst the humidity and sporadic showers of the rainy season, Green Shoots and their local partner, a nonprofit called the Community-based Integrated Development Organization (CIDO), visited five secondary schools around the rural area of Samrong, where the project is based. While the project includes primary and secondary school, it was essential to hone in on the latter as these students are at a crucial point in their lives, carving out a future for themselves in an ever-changing Cambodia.

The results from these focus groups can be categorized according to three themes: knowledge share, careers in agriculture, and barriers.

It was rewarding to hear students were vocal and appreciative about what they had learned while going through the ASPUS training schedule in their respective schools. As one student shared:

It was interesting to note that all participants in the focus groups had activity at the home level. Although the Green Shoots project focused on vegetable production, many students were growing fruit and wanted to learn more about it. When asked why they said they felt growing fruit could achieve a better price in the market and that it was also beneficial for home consumption, as it is quite expensive in the market. Most of them were aware that fruit is being imported from abroad and, at times, heavily sprayed with chemicals.

This was a difficult question for most students to respond to. However, the responses received were eloquent and well thought out. One student said:

“I want to pursue a career in agriculture as there is a lack of skill and human resources. Farmers are using too much chemicals, which is leading to illness. What they need is technical support and guidance”

This is an example of a student interested in going to university to study agriculture technique with a vision is to set-up a large-scale farm that not only involves horticulture but also focuses on flowers. This is a good starting point for integrated pest management and companion planting.

When discussing barriers to agriculture careers, our anticipated responses were around access to skills, access to social capital, will of parents, and so forth.

However, one key barrier was students’ inability to progress further within the Cambodian education system: 90 percent of focus group discussion participants were worried that they will not be able to pass the secondary school examinations into high school.

U.S. Agency for International Development data shows that in 2011 primary enrollment reached 96 percent of the child population, secondary school 34 percent, and high school 21 percent. So what happens to the ones not making the cut?

Another widespread response was financing of further education. While schooling in Cambodia is free, associated costs for schooling can be quite taxing on a struggling household. Which is why a small percentage of students were concerned that their parents might prefer them to go to Thailand than study further.

Last, but not least, we opened the floor for students to discuss the “change they want to see” in their lives as well as within the rural areas.

It demonstrates that there is awareness around unhealthy food products, especially when it comes to vegetables. Most students relayed that this was either via the news, social media, or through their parents.

It also fed back into making a case for constant sharing of knowledge and having good techniques available for farmers. But made us think, what are the tried-and-tested methods to reach out in the rural population? Should we take “knowledge” to them or allow them to seek it out?

We have worked on an Agriculture Skills in Public Schools project, while another popular approach is Farmer Field Schools. Perhaps it would be innovative to fuse the two together and provide a purpose-built learning area/incubator that not only introduces technique but also focuses on support such as social and financial capital.

It is essential to step back and also take stock of where Green Shoots is working and how the place is changing.

Odar Meachney, a province in the North West of Cambodia, is one of the most recently carved out administrative areas of Cambodia. This took place in 1999, after the fall of the Khmer Rouge.

“The new province comprises some of the most war-ravaged areas of Cambodia, including Samrong and O Smach,” a news publication described in 1999. “It was with few facilities or services, a semi-transient population, ravaged natural resources, rampant malaria and a pernicious landmine problem.”

Much of this has changed.

The population is seemingly less transient, malaria has been curbed, and landmines are virtually non-existent. However, a plethora of new issues have arisen. These include the rampant rural exodus to near-by Thailand, lack of jobs for young people, and new villages as the government issues Economic Land Concessions here. These, coupled with infertile soil, poor water quality, and poor farming practices, paints an altogether new picture.

Taking into account the loss of students from secondary school to high school and the lack of jobs for young people, Green Shoots wishes to provide students with a plan B, giving them skills to be more self-reliant but also hone their ideas and make them a reality. 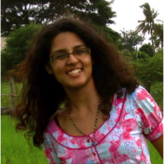 Muneezay is the Operations Manager of Green Shoots Foundation. She is based is London and has worked for the charity since 2011- first as an intern and between 2013-2014 specifically on kickstarting the Cambodia project. In the past, she has worked freelance for numerous charities on monitoring & evaluation and is a contributor and assistant editor on the book Sustainable [R]evolutions– a book about permaculture and eco-villages globally