Fall Armyworm (FAW), or Spodoptera frugiperda, is an insect pest which can cause significant crop yield losses if not properly managed. It is indigenous to the American tropical and subtropical regions, but was recently introduced into Africa and has spread rapidly, posing a threat to food security. While it is unclear how it was introduced into Africa, it was likely through commercial air transport from the Americas. Once introduced into an area, the pest is nearly impossible to eradicate due to a number of reasons.

For example, while FAW favors maize, its larvae are able to feed on more than 80 plant species that allow it to survive on alternate hosts when maize is not in season. FAW can fly long distances, up to about 62 miles (100 kilometers) per night, with the aid of air currents. Therefore, because of how widespread the pest is, eradication is prohibitively expensive. It is still unclear how FAW will adapt to the African ecological environment and climate change, but continual spread of FAW will likely occur through trade and natural means.

Every quarter, the U.N. Food and Agriculture Organization (FAO) releases an early warning bulletin on trans-boundary threats, which includes FAW. It forecasts the likelihood of a threat occurring over the next three months, containing precise information on FAW’s likelihood of spread and occurrence at the country level.

FAW multiplies rapidly throughout the maize growing season, but during the off season (dry season), FAW’s spread is limited because its favored host is unavailable. However, damage can still occur because FAW may feed on irrigated maize or alternate crops during this time. FAW has been concentrated in Sub-Saharan Africa, but the pest is likely encroaching into North Africa. Countries need to monitor and prepare prevention and management strategies to maintain control.

From the onset of FAW infestation in Africa, FAO has advocated for an Integrated Pest Management approach, supporting FAW management practices through technical assistance, awareness raising, communication and coordination, training, and capacity building. FAO is actively engaging with smallholder farmers to help them cope with this pest.

With its partners, FAO has developed a Framework for Partnership to guide project development and implementation and coordinate the responses of the various stakeholders along well-defined focus areas. FAO has also developed a five-year Program for Action that is composed of six components: management of FAW, short-term research priorities, communications and training, monitoring and early warning, policy and regulatory support, and coordination.

FAO is also facilitating South-South cooperation between the Americas and Africa so that the American smallholders may share their experiences in managing FAW. Through Farmer Field Schools (FFS) that represent a participatory approach to creating a sustainably managed food production system, FAO hopes to build countries’ capacity to respond to and prevent FAW outbreaks. Within the context of FAW, FFS are providing training to farmers on FAW identification, biology, ecology, and preventative measures.

Lastly, FAO has prepared guidance on pesticide and genetically modified crop use and is working to develop an agroecosystem approach to manage FAW sustainably. Recognizing that monitoring and early warning is a major step to preventing the pest, FAO is strengthening monitoring and early warning systems through artificial intelligence, remote sensing, and mobile phone apps. The mobile app allows farmers to collect and record data on their crops, FAW infestation levels, and utilized control measures. 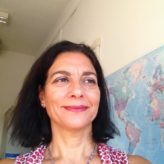 Dr Mona S. Chaya is currently Deputy Strategic Programme leader of the Strategic Program “Make Agriculture, Fisheries and Forestry more productive and sustainable” at FAO. She was Senior Coordinator of Food Chain Crisis Coordination and Intelligence Unit at FAO from 2009 to 2018. She worked 13 years in the humanitarian field with FAO on agricultural rehabilitation and livelihoods resilience in countries affected by wars and natural disasters (Bosnia and Herzegovina, Burundi, Afghanistan, Uganda, Sri Lanka, Lebanon, Philippines, Moldova and Myanmar). She worked in research at the ICARDA, Aleppo, Syria. Dr. Chaya holds an MSc in Agronomy and a PhD in Plant Molecular Biology.

Emily Zweber on Organic Farming, Sustainability, and the Next Generation of Farmers