“There’s a false choice between flavor, nutrient density, and yield” in our food system, Chef Dan Barber says in a conversation to kick off the 2018 NYC Food Tank Summit.

Rather than focus on features like storage and uniformity, by breeding for flavor and nutrition—as well as for specific farming regions—we can grow better food and build a better food system, says Barber.

Barber’s new seed company, Row 7, is working on potatoes bred to be so creamy that the cook can skip butter, and squash so flavorful that eaters won’t be reaching for sweeteners like maple syrup.

In a Fireside Chat with Food Tank President Danielle Nierenberg, Barber talks about democratizing sustainable, flavorful eating and moving outside “the cathedral of the white-table restaurant.” Row 7 develops seeds with chefs, the environment, and affordability in mind.

Barber’s journey to Row 7 began when he joked to a breeder: “Why don’t you breed a squash that actually tastes good?” Michael Mazourek, a Cornell University horticulture professor and Row 7 co-founder, got to work. He worked with Barber on honeynut squash, which contains less water and more flavor than standard butternut squash.

“You will hear about it,” Barber says. “I say that proudly as the father of a budding adolescent squash.”

Barber says that, until now, breeders weren’t focused on flavor, largely because no one was asking. He talks with Nierenberg about the inefficiencies of crops like broccoli, which is usually bred to have a large head. Using a potted plant on stage as a prop, the James Beard award-winning chef demonstrates the volume of leaves typically left behind after harvest.

It’s possible to cook with the leaves and the stalks of broccoli, which chefs like Barber do. But it isn’t always easy, and home cooks are less likely to accept the challenge. So, Barber says, we need broccoli that’s palate-pleasing throughout—with tender leaves and stalks that are easy for anyone to craft into a meal.

“Broccoli leaves are stunningly delicious,” he says. “As we know from broccoli rabe.” Heirloom varieties have great flavor profiles but they’re hard to grow, making them risky for farmers and expensive for consumers.

“We should not take old seeds and wrap them and hug them and say nobody screw with my seed because my grandmother always cooked this. That’s crazy. We should take these seeds and continually update them for regions.”

Watch the full fireside chat with Dan Barber, above. 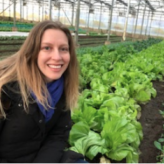 Rachael Jackson is the founder of EatOrToss.com, a photo-based website that provides short, science-based explanations for foods that don’t look quite as consumers expect. She also serves on the board of the DC Food Recovery Working Group, where she leads RescueDish, an effort to highlight restaurants in Washington, DC that are doing creative things with underutilized ingredients. From 9 to 5, you’ll find Rachael, a former newspaper reporter, working on television shows for the National Geographic Channel.