Building Blocks began in 2016 and is changing the way cash transfers work by shifting the system from banks to blockchain. Blockchain is a digital ledger technology that tracks transactions and maintains an accurate record. WFP’s blockchain system transfer vouchers based on Ethereum, a cryptocurrency, to refugees, and then refugees can use the vouchers to make purchases.

Food vouchers, and cash transfers generally, are an important part of international aid. They enable people to afford food locally and make their own purchasing decisions. In 2015, 9.3 million people received cash transfers from WFP.

Blockchain is already a familiar buzzword in technology news cycles. According to Robert Opp, Director of Innovation and Change Management at WFP, “The exciting part is that these innovations, often developed for more commercially attractive markets, have such potential to improve the lives of those who are furthest behind.”

It already operates at a large scale. Opp says, “All 106,000 Syrian refugees in the camps of Azraq and Zaatari now redeem their cash transfers on the blockchain-based system. So far, more than US$ 23.5 million worth of entitlements have been transferred to refugees through 1.1 million transactions.” By March 2019, Opp expects that an additional 400,000 refugees will receive their assistance through a blockchain.

The implications are historic for humanitarian food assistance programs. The blockchain system improves WFP’s services’ transparency, efficiency, security, and speed. Prior to the use of blockchain, families sometimes needed to wait days for transfers from local banks, and their identifying information was vulnerable at those institutions. Now, WFP’s blockchain system encrypts refugees’ data and enables workers to transfer vouchers almost instantaneously once refugees are registered. Opp adds, “Because much of the code is “open source” and is scrutinized by a much larger community than any closed source code could manage, it is in fact more secure [than other transactions].”

For WFP, it has the additional benefits of saving 98 percent of bank transaction fees. Opp explains, “Transaction costs have been almost eliminated, offering donors distinctly better value for money.” All of this means that now, WFP can give more meals to hungry people.

Opp also anticipates opportunities for collaboration to benefit refugees through blockchain technology. He expands, “We believe that a blockchain collaboration platform could benefit the entire humanitarian community. For the first time, WFP and the UN Women program are now partnering on the blockchain, prioritizing innovative technology as one of the drivers for change, and to accelerate progress towards women’s economic empowerment on a larger scale.”

There is some criticism of the system: some say that the current pilot is too small to see the benefits of using blockchain, that transaction costs may increase, or that there are ethical dilemmas at play when testing new technologies on vulnerable populations. Zara Rahman, a researcher at Berlin-based organization The Engine Room, is a proponent of caution, stating “Overall, it is essential for human rights workers to stay critical and see past the hype. Though a certain tool might seem like the easiest option now, what about in two years or five years time? What will you want to do with the data, and who owns it?”

But according to WFP, there is also potential that the system could expand to aid more refugees and in more ways. Houman Haddad, a WFP executive behind Building Blocks, anticipates a complete ID system in which refugees could operate with an identification not dependent on any national authority. Several start-ups have taken up the cause of food aid delivery in different countries: Disberse and Devery are two companies doing just that.

Opp is optimistic as well. He is hoping to adapt blockchain for supply chain uses and continues to search for ways to use cutting edge technology to help vulnerable people. He concludes, “We see it as an imperative to try to leverage innovative digital technologies and are already applying them for our work, as they have the potential to strengthen food systems, shorten humanitarian response times, deliver assistance more effectively, and make funds stretch further.” 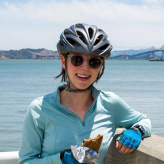 Maddie is a former Research and Communications Intern for Food Tank and recently completed a Master of Global Affairs and Public Policy from the Schwarzman Scholars Program at Tsinghua University. She also holds Bachelor’s degrees in environmental science and international affairs from Northeastern University. When she is not researching, she can be found baking savory breads, training for her next marathon or curling up with a crossword.
Previous Article

119 Organizations Shaking Up the Food System in 2019