According to a recent report from Purdue University’s Center for Food Demand Analysis and Sustainability, consumers want more sustainable food options. As the co-founder of Eat the Change, PLNT Burger, Honest Tea, and Chair of the board of Beyond Meat, Goldman is working to respond to this demand.

Goldman explains that he sees two distinct approaches companies take as they work to move away from our unsustainable food system. He calls these approaches “redoing food” and “undoing food.”

The redoing of food is “when you use a combination of science and culinary art to recreate a [food] category,” says Goldman. These are often “plant-based products that replicate taste and texture but overcome environmental downsides.” Beyond Meat and PLNT Burger, which both sell meat alternatives, represent redone foods.

But as an entrepreneur, Goldman “does not feel conflicted having a foot in both of those worlds,” he says. He believes that “as long as you are moving away from mainstream foods, many of the ways you can go are positive directions.”

Goldman also warns the audience that changing people’s eating habits is one of the greatest barriers they may face while trying to make the food system more sustainable. Introducing new products to the market can challenge “part of people’s identity,” says Goldman. “That is real work, that doesn’t happen easily.”

But Goldman finds that providing accessible and affordable products can make change slightly easier. For him, accessibility entails replication of cooking process, not a “new food occasion.” If eaters can prepare and consume products in ways that feel familiar, they are more likely to transition to more sustainable alternatives.

But Goldman encourages his audience not to be disheartened by the consumer economy. Honest Kids, a juice box developed by Honest Tea, was able to remove over 1 billion calories from the American diet in its first year after it was introduced to the McDonalds kids menu. This success, he says, demonstrates that progress is possible.

Goldman argues that through these dietary changes, it is possible to have a tangible effect on human and environmental health. “There is no other daily action you take where we have opportunity to make such an impact on the planet,” Goldman says. 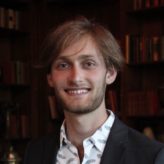