It’s not easy being a farmer. The days are long and many don’t make a living wage. Mental health issues are common amongst farmers, often due to mounting stress about money, weather, crop failure, and debt.

And fertile farmland is becoming scarcer. Open land is being threatened with development every day, and the loss of precious topsoil means that one day in the not-so-distant future, we may very well run out of healthy soil in which to grow food.

Despite all the challenges that land loss brings to farmers around the world, many individuals and organizations are finding new and innovative ways to grow food and sustainably feed their communities.

Urban farmers, for example, are reclaiming rooftops, vacant buildings, empty lots, yards, abandoned parks—and even the patches of grass between sidewalks and roads—in order to grow food. And they’re making a big impact.

Why Does It Matter?

Food security is a problem in cities and rural areas across the United States. Due to economic and social inequalities, people living in low-income neighborhoods, in particular, are more likely to also live in food deserts and not be able to as easily access affordable, fresh food.

And as growing conditions become harsher around the world, the rising threat of climate change adds to the urgency of finding more efficient and sustainable ways of growing and distributing food.

“As global temperatures rise, areas all around the world are likely to see reduced food security, both related to the cultivation of food animals and agricultural production,” according to the University of Nevada, Reno. “If climate change continues to worsen, food shortages could drive prices higher even in more developed countries like the U.S., leading to a public health crisis in the form of global food shortages and waves of hunger. As such, public health officials should turn their attention to exploring efforts to shore up food reserves and alternative forms of agriculture.”

That’s where urban farming comes in. The loss of traditional farmland and increasing need for food security for all means that farmers in urban spaces are getting creative and finding ways to take matters into their own hands.

The Rise of Urban Agriculture

While urban agriculture has been in practice for many years, it has gained traction and popularity in recent years.

Urban farms often provide access to food for people who are living in food deserts and would otherwise have to travel many miles to get fresh, affordable produce. As farms are pushed further and further outside city limits and away from major residential hubs, farmers had to find solutions in the city to bring food closer to home.

Many urban farms, in addition to feeding people, bring a sense of unity to their members. Community gardens are increasing in popularity across the U.S., bringing more and more people into the practice of growing food—even if it starts as just lending a helping hand to grow a handful of lettuce or a few peppers.

And as more people learn the skills to grow their own food, those living with food insecurity will likely have more places to source food from within their cities and neighborhoods.

What We’ve Lost & What We Have to Gain

Many people—in urban areas, especially—don’t know what a carrot looks like when it’s freshly pulled from the ground, or that a tomato tastes so much better when it’s plucked from the vine in summer instead of shipped across the country in winter. Along with farmland, society has also lost a true connection to food and seeing how and where it’s been grown.

Eating with the seasons is especially important to general health and well-being. But it’s hard to eat with the seasons when, for many, most food is coming to the plate from a grocery store where every type of produce from every season is right at the fingertips—not to mention a plethora of cheap, processed food.

Whether farms are out in the countryside or on your neighbor’s rooftop, supporting locally sourced food is an important step in creating healthy local economies and communities, alike. Robust local economies provide greater opportunities for community members to prosper and thrive. There’s nothing quite like food to tie local people together into a tight-knit, supportive group.

As more farmland gets bought by housing developers and businesses complexes, urban farmers have reclaimed city spaces to help grow food for their local communities, allowing an opportunity for all to be closer to real, fresh, healthy food. 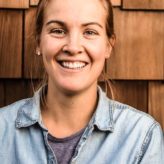 Lettie Stratton is a writer and farmer in Boise, ID. She is a co-founder of Hoot ‘n’ Holler Urban Farm.

Building the Foundation for Health: An Excerpt from Nourished Planet