I was dismayed to read the article “Making Organic Mainstream” in the most recent Food Tank email. I am one of a group of old-time organic farmers who have been battling against the United States Department of Agriculture (USDA) for allowing hydroponic, aquaponic, etc. to be certified “organic.” The Organic Standards state clearly that maintaining and improving the fertility of the soil is a requirement for organic certification. Water grown crops are not the same as soil grown crops.

All of us old farmers have battled money and power before when we were establishing the credibility of “organic,” so going up against the well-funded faux-food industry is nothing new. But what is difficult is to see an organization like Food Tank, which should be on our side, publishing a puff piece such as “Making Organic Mainstream.” What concerns me here is that the food supply for our survival as a species does not depend upon technology but, rather, depends upon the mere inches of fertile loam, powered by active microbial life, which lie on the surface of the planet. Only one agricultural science, organic farming, has shown the ability to nurture and enhance the quality of those inches. Organic is not just a seven-letter word. Organic farming was and is the definition of reality in sustainable food production.

Hydroponic or aquaponic production is the definition of unreality with its enormous consumption of resources to support artificial lighting and pumps and troughs and filters and controllers and conditioners and additives and treatments.

If hydroponic or aquaponic fruits and vegetables continue to be certified as “organic,” the USDA is guilty of grossly defrauding the present generation of organic food purchasers with a substandard product. But, on an even more serious note, that misrepresentation of “organic” will deny to countless future generations an accurate understanding of the benefits that real organic farming offers to mankind. In a world of diminishing resources, real organic farming is the only honestly sustainable solution because it can be powered exclusively by the boundless energy and logic of the earth in partnership with experienced human management of ecological systems. Thus, real organic farming brings the promise of nourishing human beings with exceptional food in perpetuity. The same cannot be said for the energy-intensive pretenders who are falsely using the organic label.

This response has been edited for clarity. 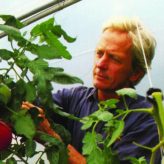 Eliot Coleman has been involved in organic farming since 1966, with experience in field vegetables, greenhouse vegetables, rotational grazing of livestock, and range poultry. He is the author of The New Organic Grower (Chelsea Green, rev. 2018), Four Season Harvest (Chelsea Green, rev. 1999), and The Winter Harvest Handbook (Chelsea Green, 2009. He was an advisor to the United States Department of Agriculture during their landmark study, “Report and Recommendations on Organic Farming.” Eliot owns and operates Four Season Farm, a year-round market garden in Harborside, Maine.

"We’ve Got to Put Our Focus Back on The Farmer”