Increased funding for organic agriculture in the 2018 Farm Bill would plant the seeds for a sustainable future.

When it comes to taking action on climate change, transitioning to renewable energy and kicking our fossil fuel addiction typically get the most attention. But the food we eat and how we grow it is just as central. Data show that many agricultural practices, including organic farming, can have a significant impact in the fight to protect people and the planet. Changing our food system, both through individual shopping choices and by pushing policy makers to create systemic change, will help us tackle the climate crisis, protect public health and safeguard the environment.

Policy solutions in the United States require transforming the Farm Bill—a massive piece of legislation that is decided on every five years. Right now, Congress is facing a looming September 30th deadline to approve the 2018 Farm Bill. To pass a final bill, substantial differences between the House and Senate versions of the bill must be reconciled through a conference committee process in which members of the House and Senate Agriculture Committees hash out a path forward.

On most accounts, organic programs fare better in the Senate version of the bill, including level funding for the Conservation Stewardship Program (CSP) and full funding of US$11.5 million annually for the National Organic Certification Cost Share Program, both of which the House bill eliminates. The Senate bill also includes a larger increase in funding for the National Organic Program, contains some helpful language about regionally adapted seeds and breeds, and funds the Organic Agriculture Research and Extension Initiative up to US$50 million by 2022 whereas the House version caps it at $30 million. Both bills include US$5 million in funding for the Organic Data Initiative and important provisions to improve oversight of organic imports. However, both bills also contain problematic provisions about the National Organic Standards Board—the heart of the transparent democratic system that governs the organic standard. For a detailed analysis of how the bills compare, see the National Organic Coalition’s scorecard.

The science is clear that organic farming systems show promise as a climate change mitigation strategy that can also help farmers increase their resilience in the face of climate-related floods and droughts. To preserve the seeds of a future sustainable food system, we need to push for the Farm Bill provisions that support American organic farmers. Unfortunately, whatever level of funding organic and conservation agriculture receive in the final Farm Bill will be just a drop in the bucket compared to the billions spent to subsidize chemical- and energy-intensive agriculture—a massive contributor to climate change and environmental pollution. Between 2009-2012, we spent an average of US$11 billion a year via the Farm Bill to subsidize chemical-intensive industrial production of grain, seed and fiber crops that provide the raw ingredients for animal feed, biofuels and highly processed food. Worldwide, agriculture contributes 19 to 29 percent of global anthropogenic greenhouse gas (GHG) emissions, making it worse for our planet than any other single sector, even transportation.

Instead of investing billions of dollars in a model that doesn’t nourish communities or the environment, policymakers must redirect funds to incentivize organic and conservation agriculture—a far more effective approach to improving food security, environmental sustainability and human health.

What’s more, at a time when so many farmers and rural communities across America are struggling, organic farming offers significant economic benefits. Data show that organic farming is more profitable for farmers and provides greater economic stability and well-being. And organic farming systems can be an important solution to rural poverty. Research shows that counties with high levels of organic farming and associated organic businesses are economic hotspots that boost household incomes by over US$2,000 and reduce poverty rates by as much as 1.35 percent, even more than major anti-poverty programs.

Before laying out the science on why organic agriculture is part of the solution to climate change, it’s important to note that the most critical change we need to make in the food and agriculture sector is transitioning from factory farmed meat and dairy to organic, regenerative and pastured animal products—and eating more plants and less meat and dairy overall. Meat and dairy products emit significantly higher emissions than plant-based alternatives, and global adoption of vegetarian or vegan diets has the potential to cut food-related GHG emissions by 63 and 70 percent, respectively.

Agricultural soils can be an important part of climate change mitigation because they have enormous potential for sequestering carbon—taking carbon out of the atmosphere and putting it back where it belong, in the ground. Many of the practices that have been found to foster carbon sequestration, such as crop rotation, cover cropping and composting, are central to organic agriculture. In fact, it is estimated that if all farmers used these carbon-building practices on the world’s agricultural soils, we could sequester the equivalent of two to three years of all anthropogenic GHG emissions.

Because of the proven benefits of these organic practices, even non-organic farmers are employing them to build soil health and the USDA, through the Natural Resources Conservation Service, is increasingly supporting them to do so. And though it’s worth it to note that not all of these strategies are universally employed by organic farmers, organic systems are still far superior to conventional systems on average. In a study of over 1,000 farms, organic soils had 13 percent higher soil organic matter and 26 percent more humification, which roughly translates into soil’s long-term carbon storage potential.

Organic systems also foster greater carbon sequestration by excluding toxic pesticides. The microbes and beneficial insects that live below ground and create healthy soil are vulnerable to pesticide application. One teaspoon of compost-rich organic soil can host as many as 1 billion helpful bacteria from 15,000 species compared to as few as 100 in conventional soil. These microorganisms are essential for drawing carbon into the soil and keeping it there, meaning synthetic pesticides aren’t only killing beneficial microorganisms, they’re undermining the soil’s ability to store carbon.

Another benefit of excluding harmful inputs like toxic pesticides and synthetic fertilizers is avoiding the energy it takes to produce them. By banning these inputs, as well as avoiding emissions from synthetic fertilizer application, it’s estimated that the conversion of all agricultural systems to organic could lower direct agricultural GHG emissions by about 20 percent. Studies show that organic systems require 15 percent less energy than conventional systems on average, with some organic systems using as much as 70 percent less energy than their conventional counterparts.

Finally, organic soils are more resilient, helping farmers adapt to the challenges of climate change. Healthy organic soils have higher water-holding capacity than conventional soils, so they can capture more water when it rains and retain it better during dry periods. That can make all the difference during droughts and floods. In one study, organic plots had 152 percent and 196 percent higher soybean yields compared to conventional plots during drought years.

A Farm Bill for a sustainable future

We need a Farm Bill that shifts subsidies away from large-scale, chemical-intensive agriculture towards far greater support for family farmers, organic systems and regenerative and diversified farming practices. A regenerative organic food system can be part of the climate solution and can build a healthy and sustainable future for people and the planet. 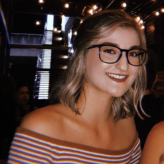 Georgina Del Vecho is a senior at Duke University in North Carolina. She is double majoring in environmental science and public policy and currently works with her university’s Office of Sustainability to raise environmental awareness among living groups on campus. She served as a policy intern for Friends of the Earth in Berkeley, California this summer, where she worked on research and policy concerning organic agriculture.

Re: Response to Fred Haberman on Making Organic Mainstream