According to the Global Panel on Agriculture and Food Systems for Nutrition, global food production is expected to decrease two percent every decade until 2050. People in sub-Saharan Africa and India who depend on small scale farms for their food will be disproportionately affected by climate change. But plant breeders from the International Crops Research Institute for the Semi-Arid Tropics (ICRISAT) are increasing their efforts to breed crops that are resilient and can survive in extreme weather conditions.

Innovations and advancements in the crop breeding of traditional grains can play a role in mitigating the effects of a changing climate on food production, hunger, and the livelihoods of farmers in developing parts of the world. Food Tank had the chance to speak with crop physiologist at ICRISAT, Dr. Jana Kholova. She says, “There are tools to dissect and quantify the environmental impacts on the crops and this can help to develop highly targeted products to these particular circumstances.”

Along with fellow crop physiologists Dr. Myriam Adam and Dr. Vincent Vadez, Kholova is currently working on developing sorghum varieties that match both the culture and climate of farming regions throughout India. She particularly focuses her work on farming regions in Mali that are vulnerable to climate change.

She tells Food Tank, “There are a lot of new tools available to understand the customers’ demands and production environments and accordingly develop suitable cultivars much faster using advanced genotyping and biotechnology tools and precise phenotyping methods.”

When introducing new seed varieties to smallholder farmers, it is important to consider their environments, both culturally and ecologically, says Kholova. Sorghum is the fourth most important cereal crop in Mali and something many farmers are familiar with. One barrier crop physiologists face is encouraging farmers to adopt new varieties developed in the lab. It is common that farmers who lack access to supplies like fertilizers, seeds, and even manpower are much slower to plant smart crops as it poses too much of a risk. Kholova wishes farmers were more involved in the crop breeding process, and laments to Food Tank, “The turnover of cultivars—especially for the harshest environments—is tragic. Some of the cultivars are more than 40 years old and still dominate large areas. In many cases, farmers still grow landraces that they inherited from their ancestors.”

The Paris Climate Agreement of 2015 “calls on countries to combat climate change and to accelerate and intensify the actions and investments needed for a sustainable low carbon future” and was signed by 200 nations across the world. While protecting the world from a changing climate is a daunting task that will take many years to achieve, crop breeders and scientists like Dr. Kholova are doing what they can to fight malnutrition each harvest season. Credit is due to the scientists like her around the world working hard to ensure that rural communities will be able to sustain their livelihoods and avoid hunger during a time of critical climate turmoil. 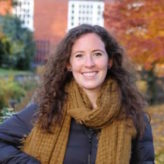 Kirby is a passionate food researcher and a former Fellow on the Food Tank team. She graduated from Northwestern University in 2016 with a degree in Anthropology, and minors in Psychology and Spanish. After writing her undergraduate thesis about food culture in Seville, Spain, one of her favorite places on earth, she has continued to pursue learning more about food culture in everyday life. She organizes food-themed events for Atlas Obscura Society Chicago, and spends her free time volunteering, rock climbing, traveling, and biking. She’s especially interested in reducing food waste and solving hunger and malnutrition.
Previous Article

Riana Lynn: Partner Across the World, Across Genders for Food Change