In early October, the Supreme Court will hear a challenge to California’s contentious Prop 12. The 2018 ballot initiative would enact some of the country’s strictest animal welfare regulations, particularly for pigs and egg-laying hens. While the proposition was supported by an overwhelming majority of California voters, grocers, restaurateurs and the livestock industry argued it would limit supply and increase costs. Animal welfare activists lamented that it didn’t go far enough.

Both sides may be right. Consumers want it all: affordable bacon, from happy pigs. Laws such as Proposition 12 shed light on our evolving relationships with food and the animals it comes from, and the disconnects between the two.

As a cardiologist turned entrepreneur, I’ve been fascinated, and puzzled at times, by what people eat. Our relationship with the animals that become our food has always been complex, with 77 percent of consumers now saying they are concerned with the animal welfare implications of their food choices. Beyond California, eight other states in the U.S., ranging from Michigan to Utah, have banned cages for egg-laying hens. In 2018, Switzerland banned boiling lobsters alive.

These all reflect a growing puzzle of loving meat and loving animals. Indeed, 89 percent of Americans eat meat, but at least one-third of Americans say they’d support banning slaughterhouses altogether. Animal welfare has never attracted as much attention as it does now, but humans are slaughtering more animals today than ever before.

This is a dramatic paradox with no apparent solution—until now. Never before have food innovators been so laser focused on developing solutions that could resolve this dramatic paradox for good. Consumers will need to decide if they’re open to them.

One set of emerging technologies promises to improve animal welfare associated with existing practices. For example, technologies that identify the gender of chicken embryos before they hatch can eliminate the common practice of slaughtering male chicks after they are born. New methods of animal slaughter like controlled atmosphere stunning can make the process less painful for animals. Scientists have even created cows without horns, eliminating the need for the painful dehorning process.

And while these innovations typically begin in small pockets in the private sector or academia, they can also inspire broader systemic and policy change. For instance, after the aforementioned “in-ovo sexing” technology was commercialized, Germany and France announced their intention to ban the slaughter of male chicks.

Subtracting the animal from the equation

Another emerging sector of food innovation is focused on replacing the animal entirely. Consumers can already buy a variety of meat alternatives, from plant-based meat substitutes to fungi-based proteins. These products are not your grandma’s veggie burgers—they are closer than they’ve ever been to mimicking the taste of meat. Scientists can also now produce proteins typically found in cow’s milk or chicken eggs—think whey or albumin—using a fermentation process similar to beer brewing. In this process, a special strain of microbe or yeast is developed to produce the desired protein. A few companies in this space have already announced products that contain real dairy—without the cow. Others have developed real egg proteins, no chickens required.

But the holy grail of animal-free food is cultivated meat. Unlike plant-based meat substitutes, cultivated is not a “faux meat” or meat alternative—it is simply meat, grown directly from animal cells without the need to raise animals. To make it, we take animal cells, put them in a clean steel tank similar to what you would see at a beer brewery, feed them nutrients and allow them to grow and multiply until they can be harvested, cooked and eaten. This industry, which I founded in 2015, could spark a revolution in food and animal welfare. Cultivated meat is not yet on the market in the U.S., but pending regulatory review, we hope to start selling it soon.

Of course, none of these innovations will have an impact if consumers won’t buy them. Consumers have historically had a mixed relationship with food innovation. On the one hand, consumers are often skeptical of food technology. On the other hand, 77 percent of Gen Z say they are “more likely to try a food grown with technology.” It’s too early to say if this increasing enthusiasm for food technology will accelerate or slow down—but for animals, it offers a much needed glimmer of hope.

None of this is to say that food innovation—or any technology, for that matter—is always good. It is a tool, and like any tool it can be used for better or for worse. In the realm of food, new technologies created the animal welfare paradox we’re currently living through by enabling highly efficient and scalable methods of slaughter. But they can also help get us out of it.

When it comes to animal welfare, the right technology applied in the right way can make all the difference. As a society, we need more imaginative approaches and solutions that are a match for our evolving attitudes toward animals. Food innovation can be both a reflection and a driver of moral progress towards animals. Let’s use it to unwind the paradox of loving animals and loving meat. 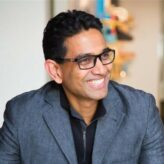 Uma Valeti is the CEO and Founder at UPSIDE Foods.