Home » Op-Ed » For Climate Change, the American Farmer is the Sleeping Giant

The most recent National Climate Assessment found that temperatures across the United States have already risen due to climate change by more than 1 degree on average. So, if we’re already feeling the effects of climate change, why do so many Americans remain skeptical of it? Part of the reason may be that while the national average changed, many parts of the country had little or no change.

American corn farmers are one such group who remain skeptical of climate change and largely unharmed by it so far. A 2013 Iowa State University survey of farmers in the Corn Belt—the middle part of the country, from the middle of Texas to the Appalachian mountains—found only 8 percent attributed climate change mostly to human activity, compared with 27 percent of the general population. Farmers and rural residents have also overwhelmingly supported President Trump, who pulled the U.S. out of the Paris Climate Accords and has claimed climate change is a myth propagated by China.

At first blush, this seems counter-intuitive, since farming is the occupation most dependent on climate and corn is highly responsive—in a negative way—to temperature increase. If temperatures are already rising, corn production should be falling and farmers should be clamoring for definitive action to mitigate the impacts of climate change. Some models show that by 2050, U.S. corn production will be 30-percent lower than it would have been without climate change. Corn is that sensitive to temperature rise, and temperatures in the corn belt are right on the cusp of a rise that will critically reduce yields.

But crucially, the National Climate Assessment numbers showing increased temperatures across the country are average annual temperature increases—a closer look at the changes in temperatures shows that the way these average temperature rises played out in the Corn Belt have not hurt farmers or their crops.

While, on average, annual temperatures in the Corn Belt have risen, they haven’t risen during the summer months when most crop production is happening and a rise in temperatures could really harm output.

Of course, temperature is only one of many climate measures that can impact crop yields, but studies have confirmed that July temperatures are the most crucial for corn production. When July temperatures get too high, corn yields fall dramatically.

The map below illustrates a simple regression I have done using similar data to check July temperatures from 1980 to 2010.

As the map shows, the corn belt has had no statistically significant increases in temperature from 1980 to 2010. In fact, the only temperature changes in the area have been quite a few places with statistically significant cooling. And a July cooling trend could have the tendency to even raise corn yields, meaning over that 30-year period, climate patterns have generally been good news for American corn farmers.

But good news for corn belt farmers has not been good news for all farmers—in other parts of the U.S. or much of the rest of the world. In the third of America west of Texas, temperatures have soared over that same 30-year period. And if you look to the rest of the world, especially Europe, Africa, and Brazil, you see how climate change has modified their weather patterns in significant ways. Farmers in many of these other countries have seen serious losses, with one well-known study showing global maize and wheat production declining by 3.8 percent and 5.5 percent, respectively, between 1980 and 2008, due to temperature change.

Seeing is believing, and over the preceding three decades, Corn Belt farmers just have not seen climate change impact their harvests—and climate-skeptic corn farmers maintain a powerful influence on U.S. politics. Groups representing the interests of corn farming in Washington like the National Corn Growers Association, along with state groups and those representing associated industries like ethanol and grain feed, spend millions of dollars on election campaigns and lobbying Congress to influence policy.

If this influence turned toward promoting adaptation and mitigation of climate change, Big Corn could become the sleeping giant who’s awakening spurs decisive U.S. action on the climate.

While corn belt farmers have been living in something akin to a protective bubble, they may not continue having an easy time. Already, there are signs that the benefits these farmers witnessed from 1980 to 2010 are fading. Looking at a shorter but more recent time window—only 20 years from 1994 to 2014—we find the large patch of green over the corn belt disappears entirely, signifying that cooling trend may have already ended. Many areas within the corn belt region have even started to see temperature increases from 1994 to 2014 (though these increases are not at a statistically significant level).

And if that is not a spurious trend but one that continues, President Trump and the Republican-led Congress should soon be hearing protests from a key constituency and non-traditional climate group—the American corn farmer. 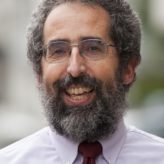 Clare Miflin on Weaving Together Urban and Natural Design Systems