At the 2018 San Diego Food Tank Summit, Mari Payton, Senior Investigative Reporter for NBC 7 San Diego, guides a discussion examining the true cost of food, taking a holistic view of the practices and policies required to improve the sustainability of the food system.

The modern food system values cheap food produced as quickly as possible, stressing the environment, the health care system, and food industry workers while deepening social inequities around race, gender, and income. And the current price of food does not reflect these true costs, says Michael Hamm, Founding Director of the Center for Regional Food Systems.

“Our food system externalizes every possible cost to make things cheaper,” Hamm explains. “What we need to do is internalize all costs. Doing this, the cost of food will go up, so we’ll have to have broader strategies to make it so that food is a right and not a privilege.”

Despite growing interest in sustainable and ethical food options, many cannot afford them—the majority of Americans wrestle between personal values and economic challenges. “The broad middle is struggling more and more [to afford food]; there is frustration at not being able to purchase the food they want,” says Hamm.

While food production is larger than ever, nearly 40 percent of food grown is thrown away. Vince Hall, CEO of Feeding San Diego, encourages policymakers and consumers to see the massive investment made in environmental resources, one that reaps no return. “Food is actually a surplus in our society,” he says. “4 trillion gallons of water, 800 million pounds of pesticides, and 30 million acres of farmland are all dedicated to growing the food that we just throw away. And then we throw that into the landfill, which releases methane gas.”

This cheaply produced food provides calories but does not nourish people. “We’ve lifted many people out of food insecurity in terms of caloric intake, but now we’re dealing with nutrition security…lacking access to adequate protein and vitamin sources in the form of fruits and vegetables and other high nutrient foods,” says Jennifer Burney, Associate Professor for the School of Global Policy & Strategy at the University of California, San Diego.

Consumers must create the demand for a more just system that allows workers to sustain themselves and their families, says Evelyn Rangel-Medina, Chief of Staff at Restaurant Opportunity Centers (ROC) United. “The people who are serving our food are experiencing justice issues and pushing for policy change, but our policymakers are overturning the will of the voters,” she says. “That is the kind of power that we have to fight against.”

Although no one policy or solution will solve the issue, the panel sees hope in initiatives like the bipartisan farm bill, elected governors removing corporate money from politics, and an increasingly engaged public. After all, as Burney says, “There’s no issue that more unites us all than what we eat every day.” 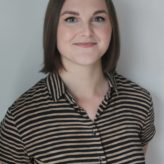 Natalie was a Research and Communications intern with Food Tank. She is a registered dietitian with a bachelor of nutritional sciences from McGill University and a passion for food sovereignty, intuitive eating, and tackling issues on social justice and human rights through the lens of food and agriculture. Natalie has seen first hand how our unstable food system has impacted her clients’ health, both physical, mental and emotional, and has made it her mission as a new health care professional to make that system more just and empowering.
Previous Article

Food On A Plate Is More Than Ingredients: “It Starts With a Story”

Taste the Revolution: 18 Cookbooks for Building a Diverse and Just Food System