Mattingly’s work offers design solutions for coastal cities to adapt to climate change and rising sea levels. In 2009, represented by Robert Mann Gallery, she created the Waterpod, floating in New York Harbor. This introductory project, an eco-habitat equipped for rising sea levels, would influence her work to come.

In 2013, Mattingly created Triple Island at Pier 42 in Lower Manhattan, an area devastated by Hurricane Sandy. It was a model for a convertible floatation structure that could be self-sustaining (and self-contained with areas for sleeping, cooking, and growing food). And in 2016, she created an Arctic Food Forest at Alaska’s Anchorage Museum, which created systems for food to grow in cold weather.

For Summer 2018, Mattingly is a part of an initiative by Storm King (a public art space in upstate New York) called Indicators: Artists on Climate Change. For this project, on view until November alongside artists like Mark Dion and Maya Lin, she transplanted tropical fruits such as paurotis palm, ponytail palm, and coconut palm on the art space’s land. It aims to shed light on the effect of rising temperatures on food supply.

Mattingly’s most well-covered project to date is Swale, a floating food forest supplying New Yorkers with free produce on a moving barge. The Swale barge began in the South Bronx and later docked in Brooklyn Army Terminal, where it will remain for the next few months at Governors Island.

Supported by a 2015 fellowship with social justice art organization A Blade of Grass, Swale’s most recent location reflects both the influx of new projects happening on Governors Island and an interest in using the island as a utopic model for New York City’s future. Other recent projects such as Shandaken, an artist residency at Storm King, have created new outposts on the island, in addition to the Billion Oyster Project’s oyster-tecture (a natural barrier acting as landscape architecture) and Earth Matter’s large-scale composting project. As a non-residential island with lots of available land, Governors Island serves as an ideal home for these experiments.

“When we pick food from trees, we care about the trees. We need more ways to intimately connect with the land we live on,” Mattingly says. “Swale is about building more common spaces, and also asking NYC Parks to include more multi-use spaces. There are about 30,000 acres of public park land in the city compared to 100 acres of community garden space. We absolutely need more public spaces for foraging and stewardship-building, and we need larger-scale participation.”

Alongside Mattingly this summer, her artist-in-residence Kim Darling and assistant photographer/artist Haley Hill are designing a pollinator space.

“Governors Island is testing all sorts of artistic ecological and technological possible futures for infrastructure in NYC. If people respond positively to projects on Governors Island, it’s possible to imagine them being introduced in different ways to more local spaces in the boroughs,” Mattingly says.

Policymakers and city planners alike could also take note, to not only make areas of New York City more equipped for climate change, but also focus on projects that make the City’s most food insecure have more accessible healthy eating options.

These projects, which use Earth’s natural resources to comment on commercialization of the art world, have inspired what’s called the Land Art movement.

Long before the western art community embraced this concept, indigenous people used the land to create canvases of beauty. But in the 20th century context, artists like Agnes Denes, famous for planting a 1982 wheat-field on Wall Street, had been a trailblazer for the ecofeminist art movement.

“[Land art is still big] because food is at a crisis point, it is affecting everyone’s health and well being, from the farmers to the consumers to those affected by the plastics in the landfills,” Mattingly notes. “It is a desperate time for food, and as many people as possible need to be involved in re-envisioning industrial agriculture, there is no excuse for the multiple ways land, fauna, flora, and people are harmed in this system.”

In a time when changing legislation is threatening equal access to nutritious foods, art can be used to design for solutions to circumvent this, by creating alternative ways for the public to gain access to free, healthy eating options. 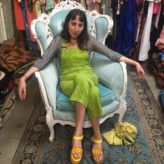