Dutch artist Daan Roosegaarde is working to highlight the beauty of agriculture by combining art and science in a leek field in the Netherlands. His exhibit and short film, GROW, aims to bring attention to the work of farmers.

GROW is a 20,000 square meter leek field equipped with four light systems that help plants grow and act as an art exhibit. The precisely placed solar-powered lights help promote plant growth and reduce the need for pesticides up to 50 percent without contributing to light pollution.

Each night, the red and blue waves of light spread out across the entire field and are intended to inspire people to reflect on the origins of their food.

“It starts with creating connectivity with the farmer, the food, and the places that feed us,” Roosegaarde tells Food Tank.

The corresponding film explains the process of constructing the project and how it operates. The exhibit is part of a series of dreamscapes expected to expand to 40 countries, each highlighting a different crop.

GROW is the result of a two-year collaboration between Roosegaarde’s design lab Studio Roosegaarde, Rabobank, Wageningen University & Research, Springtij Forum, and the World Economic Forum in Davos. Roosegaarde took part in Rabobank’s 2019-2020 artist-in-residence program, which aims to exchange ideas between employees and artists that work towards the bank’s mission of making positive contributions to society.

During his time in the residence program, Roosegaarde was asked to look into the concept of a food transition, which is about “creating a food and [agriculture] sector that can produce healthy, nutritious food for the growing world population within planetary boundaries,” Rabobank’s PR Manager Jamie Duijvestijn tells Food Tank. She explains that the global food system is under stress, and innovation will be necessary to successfully feed a growing population while fighting climate change.

Despite being the sixth smallest country in Europe, the Netherlands is one of the world’s largest agricultural exporters, according to the Netherlands Ministry of Agriculture, Nature and Food Quality. The countries’ exports, amounting to 95.6 billion euros (US$115 billion) in 2020, include fruit, flowers, vegetables, meat, and dairy products.

“In the post-World War II years, the call to be self-sufficient in terms of the need for food could only be met by innovation. And also by cooperation, between knowledge centers, the government and food and agricultural businesses—the triple helix,” Duijvestijn tells Food Tank.

Since its recent installation, GROW has reached an audience of over 670 million people. Studio Roosegaarde’s future projects will also focus on using art and innovation to inspire people.

“If we cannot imagine a better future,” Roosegaarde tells Food Tank, “we also cannot create it.” 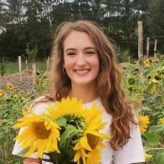