Climate change has emerged as one of the most challenging issues facing the world. Global climatic change has resulted in new and unpredictable weather patterns which are impacting farmers and food security in different regions around the globe. In Jamaica, a noticeable decrease in rainfall and increase in temperatures over the last two decades has directly impacted Jamaica’s small-scale coffee farmers. Farmers and researchers have noted an increase in pests and diseases and changes to the development of coffee crops, impacting production and causing economic losses to crop farmers. In response to these challenges, Jamaica’s coffee farmers are implementing new, adaptive measures to fortify their crops against climate-related shocks and build resilient livelihoods.

Even though all countries are threatened by the adverse impacts of this phenomenon, the economic sustainability and livelihoods of Small Island Developing States (SIDS) such as in the Caribbean region face a greater risk. According to research from the University of the West Indies, the Caribbean is expected to experience the impacts of climate change through increased variable rainfall, higher temperatures, and severe storm events, as well as an exacerbation of the warming and drying trends characteristically associated with El Niño events. These negative impacts further compromise the ability of island states to adapt to the changing climate, as their existing economic, institutional, social, and political vulnerabilities are increasingly pressured. For Jamaica, the agricultural sector is one of the many areas where climate change has increased the unpredictability of seasonal weather patterns around which farmers have defined their farming activities.

Regardless of this notoriety, coffee farmers have not escaped the adverse consequences of climate change. An International Trade Centre 2010 report stated, “coffee growers are by far the most numerous group that is directly affected and the most vulnerable” to climate change impacts. This statistic is mainly due to the significant influence that temperature and rainfall conditions have on potential coffee yield and crop development at various growth stages. The balance of these environmental factors is integral in crop productivity and quality.

Jamaica’s coffee farmers operate in a complex environment characterized by economic, social, political, institutional, and ecological conditions which often become disadvantageous. While coffee farmers face the many challenges of an increasingly uncertain climate, these challenges are compounded by multiple systemic stresses which increase their vulnerability. These cumulative and increasing stresses ultimately influence their adaptation decisions.

Most small-scale coffee farmers depend entirely on rainfall. However, farmers now see that there has been a decrease in rainfall and an increase in temperatures over the last 20 years. This decrease is especially noted during the April/May period—a period which is crucial for the early flowering and berry development of coffee crops.

Farmers also see that the severity and frequency of droughts have increased. With water resources already stressed, farmers are therefore unable to water their crops effectively. Because of this coffee production decreases and the bearing season is delayed.

Recently, farmers have experienced two successive years of drought (2013/2014 and 2014/2015) which resulted in underdeveloped coffee beans. Variable rains also increased the effects of the coffee leaf rust disease, amplifying the challenges faced by farmers to survive within the industry. With the island’s main coffee variety—Arabica typica—being more susceptible to pests and diseases and highly sensitive to increased temperatures, farmers are further disadvantaged.

The U.N. Food and Agriculture Organization (FAO) has highlighted how climate change may influence certain pest and disease outbreaks due to changes in temperature and rainfall patterns. One such example is the coffee berry borer (Hypothenemus hampei). The coffee berry borer is a small beetle that thrives only in coffee berries. Some farmers have reported an increase in the prevalence of the pest, as well as its occurrence at altitudes once absent, causing economic losses to crop farmers.

In addition, coffee leaf rust (caused by the fungal disease Hemileia vastatrix) has severely decreased production and threatened farmers’ economic livelihood. In 2014, the International Coffee Council reported that the 2012/2013 crop year experienced one of the worst recorded outbreaks of leaf rust, with coffee production in some Central American countries (Costa Rica, Guatemala, Honduras, Nicaragua, and El Salvador) being severely affected. During the same crop year, the coffee industry in Jamaica also experienced its worst case of coffee leaf rust. According to farmers, the outbreak coincided with the passage of tropical storm Sandy in October 2012. Farmers believe that this was facilitated by the humid conditions which accompanied the storm, dispersing the fungal spores to areas and altitudes that previously had been unaffected.

In the midst of these challenges, Jamaica’s coffee farmers are implementing several adaptive responses to the impacts of climate change. Some farmers are using the Arabica gesha (a more disease-tolerant and robust coffee cultivar) to combat the negative effects that the coffee leaf rust and rising temperatures have on the traditional Arabica typica variety. Due to unpredictable rainfall, farmers are also delaying fertilizing their crops, as fertilizer must be applied with water otherwise it will cause damage to coffee plants.

In an attempt to increase moisture retention and efficiently use the limited water available, farmers are also applying a grass mulch to the root of coffee plants and intercropping banana and plantain trees throughout the farm for added shade. Intercropping also allows farmers to generate additional income and contribute to household food security. Some farmers have also explored the decision to abandon their coffee farms for other valuable and exportable commodities such as sugar cane, cocoa, and yams; mainly due to their production throughout the year, inexpensive maintenance, and low initial financial investment.

Climate change will continue to push small-scale coffee farmers towards new realities, as they occupy a fragile space within an industry shaped by broader political, socio-economic, and institutional forces. Many recent policy discussions have incorporated the idea of “building resilience” within rural communities to address farmers’ increasing vulnerabilities. “Building resilience” may imply strategies to help farmers deal with shocks and stresses, or to bounce back. However, this concept has been broadened by some experts to suggest that getting farmers back to their original system is not enough—the goal should be for farmers to come back stronger and better positioned for the future. It is therefore impossible to build resilience without first addressing—and transforming—the underlying power relations and social, economic, and political conditions which contribute to farmers’ vulnerability.

In the midst of these challenges, coffee farmers have remained resilient and taken action. It is precisely because farmers are vulnerable that they become autonomous, purposive actors who exercise adaptive strategies and negotiate their resilience in the face of adverse circumstances. They creatively empower themselves in the midst of unfavorable situations. Consequently, improving farmers’ adaptive capacity through education, efficient infrastructure, financial safety nets, and social capital would reduce their vulnerability and enable farmers to not only survive shocks and stresses but become resilient and overcome future challenges. 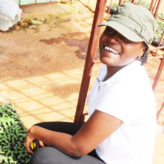 Anne-Teresa Birthwright holds a Ph.D. in Geography at the University of the West Indies and a BSc. (Hon) in Geography and Geology. Her studies use a mixed methods approach to comparatively assess the vulnerability and impacts of climate and economic change on small-scale farmers within Jamaica’s two major specialty coffee production systems.