For Indigenous communities, food is much more than a commodity.

“When we look at hundreds of Indigenous models, we find their foods are the accumulation of direct connections with the land, with each other, and with ancestry,” says A-dae Romero Briones (Cochiti/Kiowa), Director of Programs – Native Agriculture and Food Systems at the first Nations Development Institute. “Food is the art, the symbols, and the stories of how a people has a conversation with the Earth.”

Around the world, podcast episodes and films are documenting and celebrating Indigenous farming techniques and culinary traditions. From a chef reclaiming dishes once lost through colonization to a farmer using Indigenous principles to grow her food, these works highlight cultural significance of Indigenous foodways. And they help to demonstrate the importance of listening to and learning from Indigenous voices.

In honor of the International Day of the World’s Indigenous Peoples on August 9, here are 16 podcasts, short videos, and documentaries celebrating these Indigenous foodways around the world.

This short video produced by the U.N. Food and Agriculture Organization highlights the work of Asaph, a traditional hunter and wildlife conservationist living in the Rapununi in Guyana. Threats to the area’s rich biodiversity are increasing, but with the help of the Sustainable Wildlife Management Programme, Asaph is working to improve the sustainable use of wildlife and protect the environment. Those interested in learning more about Asaph’s work can also do so here.

Based in New Zealand, Dr. Jessica Hutchings is a kaupapa Māori research leader and a Hua Parakore (Māori organic) farmer. In this film produced by Happen Films, Hutchings discusses the Hua Parakore, a framework based on Māori principles for producing natural food without chemical inputs. Hutchings, who helped develop the framework, explains why the approach requires farmers to consider their connection to the land, the world’s many living species, and their relationship to one another.

Directed by the James Beard Award winning filmmaker Sanjay Rawal, “Gather” follows Native American individuals working to reclaim their spiritual, political, and cultural identities through food sovereignty. Stories include a chef working to reclaim his tribe’s ingredients and a high school student demonstrating the nutritional significance of buffalo. While the documentary outlines the destruction and historical trauma caused by centuries of genocide, it also tells a story of resilience and innovation.

All My Relations is a podcast hosted by Matika Wilbur (Swinomish and Tulalip) and Adrienne Keene (Cherokee Nation) that explores issues facing Native American peoples today. In this episode, Wilbur and Keene speak with nutrition educator Valerie Segrest (Muckleshoot) to discuss the legacy of colonialism on foodways and the work to restore Native food sovereignty. Segrest helps to define Indigenous food sovereignty and explains how others can contribute to the movement.

Food Systems: From Farm to Plate

Point of Origin is a podcast series about global food stories. Through a conversation with Chef Binta, this episode explores the foodways of the Fulani people. A self-described nomadic chef, Chef Binta documents Fulani narratives and hosts culinary popups inspired by Fulani culture throughout West and Central Africa. She helps to define Fulani food, explains the passion required to prepare Fulani dishes, and discusses the ways nature inspires her cooking.

Indigenous Farmworkers – “Do your work no matter what other people say”

This episode of the Toasted Sister podcast features a conversation with Indigenous immigrant farm workers based in Colorado. Host Andi Murphy (Navajo) learns about their journey from Guatemala and the impetus for leaving their homes. Murphy also speaks with Dr. Giovanni Batz, a social anthropologist who studies Maya migration, displacement and diaspora, and Indigenous movements.

This episode of Point of Origin turns its attention to Indigenous food systems in the United States. Indigenous chefs and journalists, including Sioux Chef Sean Sherman, join the show to discuss the ways that they are protecting and promoting their foodways. Topics include the importance of land preservation and gathering practices as well as approaches to the food system that truly honor Indigenous foodways.

Threshold is a Peabody Award-winning public radio show and documentary covering some of the most pressing environmental issues. On “Inuit Food Security, Inuit Sovereignty,” listeners learn about the importance of food security for Inuit self-determination. The episode also explores the ways climate change and the COVID-19 pandemic are affecting the regional foodways that the Inuit peoples rely on.

The International Fund for Agricultural Development (IFAD) created this short video following the Second Global Meeting of the Indigenous Peoples’ Forum. During this meeting 40 representatives from Indigenous Peoples’ organizations around the world discuss their food systems and sustainable livelihoods. Incorporating footage from the Global Meeting and messages from participants, the video underscores the importance of Indigenous agricultural practices and food systems.

In this episode, Andi Murphy of Toasted Sister delves into the history and science of nixtamalization — a process that unlocks the nutrients in corn and allows it to be turned into hominy and masa. Despite the fact that Indigenous peoples developed the nixtamalization process centuries ago, the episode explains that these contributions have largely gone uncredited and overlooked. To uncover this history and the Indigenous science behind the process, Murphy speaks with chefs, scholars, poets, and more.

“Seed Mother: Coming Home” is a short film created in partnership between the Native American Food Sovereignty Alliance (NAFSA) and The Cultural Conservancy. Through animation, filmed footage, and music, the work spotlights Seed Rematriation, a movement focused on returning seeds to their communities of origin. In celebration of the film’s release NAFSA also organized a panel discussion about Seed Rematriation and role of art in promoting the movement, available here.

After fighting to maintain their land and resist enslavement, the British exiled the Garifuna people from Saint Vincent In 1797. Despite this persecution and the subsequent diaspora, the Garifuna worked to preserve their culture. Filmed in Belize, “The Garifuna Journey” celebrates the history, language, food, music, and spiritual traditions of the Garifuna people.

The Impact of COVID-19 on Indigenous Women in Africa

Produced by the Indigenous Peoples of Africa Coordinating Committee (IPACC), this podcast focuses on the impacts of the pandemic on Indigenous peoples. Listeners will hear from multiple activists, who discuss the needs of their communities and call for the development of long-term plans to support women moving forward. The conversation also underscores the important role women play in their communities’ food systems.

This Chef Keeps the Flavors of Ancient Mexico Alive

Produced by Great Big Story, this short documentary features Abigail Mendoza, a renowned chef working to keep the culinary traditions of the Zapotec community alive. Mendoza speaks to the history behind the traditional cooking techniques used in her restaurant and their importance. “Yes it’s a slower process,” she says, “but when you care about your culture and you love your people then you preserve that tradition.” 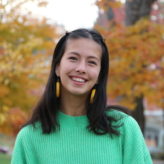 Madeleine Lee is an intern at Food Tank and a student at Bates College in Lewiston, Maine. She is an Environmental Studies major with a concentration in Humans and the Environment. She is passionate about food justice and food sovereignty and creates plant-based content and recipes on her Instagram blog. Madeleine is involved with local food justice efforts and community gardens in the greater Lewiston community.