The price of Bitcoin dramatically spiked in late 2017, making blockchain, the system behind it, a trending topic of 2018. Blockchain affects banking as well as the food system. From tracking farming processes to bringing more transparency to the food chain, this series of articles will take you through the blockchain systems in food.

As the first and second articles of this series explored, blockchain technology provides a secure and trusted way for multiple parties to conduct business together, removing silos and red tape. According to Richie Etwaru, Adjunct Professor of Blockchain Management at Syracuse University, blockchain technology “solves for trust in commerce.”

Large corporations throughout the food system have been creatively using technology with the aim of better serving consumers. The Internet of Things (IoT), or the concept of linking different devices among themselves, is being more widely used in recent years. In 2015, Tesco Korea placed a virtual store in the form of a poster in Seoul subway stations, where customers can scan a QR code for the products they want—while they wait for their train—and their order gets delivered to their door.

And with blockchain technology, IoT is crucial for enhancing applications’ effectiveness, since sensors tracking information through blockchain are far more precise and complete if connected among each other.

Chinese retail giant Alibaba will soon use blockchain technology to help prevent and solve food safety issues in China, where a prevalence of fake food, especially in the dairy and meat sector, is causing distrust in consumers. At their vendors Taobao and Tmall, blockchain will track each step of the food item from origin to final destination, verifying the authenticity of the produce that will be distributed for their 443 million active shoppers.

Walmart’s food safety department is collaborating with IBM to also apply blockchain in their system, tracking all their meat supply chain through sensors. The mission is to combat the risks of food poisoning which can cause both economical and branding damages.

Shane Ouyang, Managing Director, and Nick Ost, Director of Marketing at OwlTing, a Taiwanese blockchain-enabled food supply chain company, says these new technologies can help small producers and retailer create change in the food industry, as well. “Blockchain can guarantee the integrity of stored data,” they said, and “IoT technologies, even those as simple as recording sensors, can remove the possibility of human tampering and error.” Combining technologies means that consumers and network partners can put more trust in the data.

On farms, there is potential for a lot of data to be collected and used to improve processes. However, many farmers still keep their production data on paper; even farms with millions of dollars in annual revenue.

According to Ouyang and Ost, blockchain offers an efficient way to leapfrog data collection and storage processes for better farming practices. “IoT will automate accurate data collection, blockchain will keep the data intact and secured, plus visible among all stakeholders, and artificial intelligence (AI) can provide insights into improving the production processes and product quality,” say Ouyang and Ost.

For example, in an irrigation system, IoT devices could detect measurements such as the exact time when the system is on, the amount of water used, the temperature of the water, and the area covered. All that data would be stored directly into the blockchain database.

“On top of that, you could build smart contracts into the system, which could automatically send out alerts if the amount of water exceeded preset amounts, or send a malfunction alert if a nozzle were to fail,” according to Ouyang and Ost.

Harnessing the collective power of technology can create new possibilities for a safer, more transparent, and better food system. And if used correctly and applied realistically, blockchain technology has the potential to be a catalyst for positive change across industries. 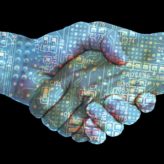 Chiara Cecchini has a MSc in International Management (ICN Business School, France), a MSc in International Relations (MGIMO University, Moscow), and a MSc in Food Innovation (UniMoRe, Italy). In the last years she has been managing International Project in the Future Food Institute, is a selected member of Barilla Center Food Nutrition  Foundation and Unleash, and has been selected for being a Research Affiliate at Institute For The Future. Chiara currently works as a Research Scholar at U.C. Davis, building the first comprehensive Internet of Food, leveraging the intersection between food systems and AI to digitalize and create a semantic enables food care.
—
Tess Pereira’s personal and professional mission is to empower others through food and technology. She earned her B.A. in Political Science and International Development at McGill University, focusing on entomophagy (eating insects) as a sustainable way to improve livelihoods by promoting food security and income diversification. She later studied at UniMoRe, earning a Masters in Food Innovation, where her research related to how we might leverage blockchain technology to incentivize higher quality food production and a more transparent food supply chain. Tess currently works at MLG Blockchain Consulting. She is also the organizer of the Women in Blockchain Washington, DC meetup.
Previous Article