Home » Sustainable Agriculture » Who Will Feed the Future?

Food dystopias make my stomach a little queasy. I remember a food industry conference that opened with one businessman dreaming of a day when cooking food would be as bizarre for consumers as sewing a pair of their own jeans. Applause ensued. What is the future of food? Are everyday people in the kitchen? Are farmers on the land?

The answer to these questions is hotly contested. Listen to the venture funds and private equity firms investing in synthetic meat, CRISPR technology, or biotech seeds. For them, the answer lies in the lab, not the soil. Tune into the billionaires backing some of the biggest food conglomerates, beverage companies, or grocery retailers, and the answer is found in bottles and cans and processed foods.

But tune into the voices of the people closest to the land, to the people buying the food, and to the data about the human and environmental impacts of industrialized farming, and you hear a different answer entirely. It’s an answer that puts farmers back at the heart of the future of food and real, whole food—not the processed stuff that fills a typical Big Box store—squarely in the center. It’s an answer that reflects the reality that, globally, smallholder farms still produce as much as 70 percent of the world’s food and are stewards of three-quarters of the world’s seed biodiversity. Likewise, listen to the researchers and scientists who have studied the potential of smallholder agroecology to feed the world and cool the planet. Their research debunks the food industry’s biggest myth: that we need chemicals, engineered seeds, and animal factory farms to feed the world.

A new photographic exhibit and campaign, We Feed the World, challenges the patronizing dogma that farming with ecological principles at heart is backward-looking by lifting up the stories of farmers who are charting a different future. These farmers, photographed by world-renowned photographers, upend the dominant story that industrial agriculture—dependent on synthetic nitrogen fertilizer, pesticides, and drug cocktails in animal operations—is key to feeding a growing world population.

The campaign is also a reminder that we don’t have to guess where the industrial path, if pursued globally, would take us. We don’t have to imagine that future; we’re living it. Here in the United States, where industrial agriculture and processed diets have dominated for the last half a century, we’re experiencing record rates of diet-related illnesses and water and air pollution driven by petrochemicals and synthetic fertilizer. As a recent index on diet-related illness worldwide found, the number of “lost years” as a result of nutritional deficiencies and heart diseases has risen precipitously in the past decade. In the major agricultural state of Iowa—a top producer of corn, pork, and eggs and the second and third largest producer of soybeans and cattle, respectively—residents know far too well these consequences. Dozens of communities have “no drink” municipal water orders because of agricultural runoff, which is also a major contributor to aquatic dead zones in the Gulf of Mexico. Iowa’s capital, Des Moines, has water so contaminated that the city’s nitrate removal facility has operated a record number of days in recent years.

Thankfully, there is another way of farming that embraces agroecological methods; one that reduces chemicals and water pollution, integrates livestock into sustainable farm models, and produces abundant, nutritious food—all while protecting the environment and our health. A growing movement of farmers, scientists, and consumers have the data to show that this way of farming has been found to use less water and fossil-fuel based inputs and to have higher yields during weather extremes like droughts and floods, which will only become more common in the coming years. It holds the best hope for food security in a climate unstable future.

We also know that this way of farming will be critical to addressing our climate crisis: while the global food system is responsible for one-third of all emissions driving the climate crisis, farmland can offer a powerful solution. Organic farming practices not only reduce on-farm emissions, they can help pull carbon dioxide out of the atmosphere, where we don’t want it, and store it in the soils—where we do. Rattan Lal, one of the world’s leading experts on soils, has estimated that if these practices were adopted across the world’s farmland with techniques like cover cropping, crop diversification, green manure, agroforestry, and sustainable animal husbandry, while restoring wetlands and peatlands and forests, we could sequester as much as one fifth of the world’s current emissions.

This ecological way of farming marries the best of modern science with ancient wisdom; it protects ecosystems while producing food that nourishes. And all around the world, from the peatlands in Indonesia to the mountain highlands of Peru, smallholder farms are increasingly rejecting industrial farming methods pushed by trade and development policies for decades and embracing these practices.

But the transition won’t happen simply by farmers committing to farm more ecologically. The power of industrial agriculture is formidable. Industry has helped to craft trade, subsidy and patent laws in their favor. The same farmers who are preserving a healthy food system are fiercely advocating for policies that make a new food system possible.

We Feed the World showcases those at the frontlines of such advocacy and innovation with stories like that of Maria Loretha from Indonesia who is helping to revive native sorghum there. For decades, government officials had discouraged sorghum planting while promoting commercial rice and corn varieties, monoculture commodities that despite heavy applications of synthetic fertilizers and pesticides were failing to yield, leaving farmers indebted. Working with local smallholders, Loretha found indigenous sorghum varieties were thriving. Now, she’s helping others in her region plant the indigenous crops, inspiring farmers to break free from the chemical-treadmill.

As the portraits in We Feed the World embody, smallholder farms still feed the majority of the planet’s people, and if we turned the current perverse agricultural subsidy system upside down, could feed even more. If we’re serious about protecting the climate, biodiversity, and public health, it’s vital that these farmers are supported—to become even better stewards of the land, protectors of carbon in the soil, and providers of food that truly nourishes.

Anna Lappe spoke as part of the We Feed the World program, which launched at the Bargehouse Gallery in London on October 12th and closes on Sunday, 21st October. A US tour is expected next year. 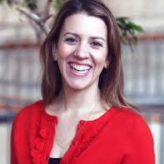 For fifteen years, Anna has been using her writing, public speaking, philanthropy, organizing, and initiatives like Real Food Media, to promote the simple idea that our food system should protect the environment, promote health and provide quality jobs with dignity. Now, as a mom of two young girls, she is even more dedicated to work toward a world in which the food that is available for them and every child is good for their bodies and for the planet.

“Food Is a Political Act Once You Open Your Eyes,” Says Aubrey