In late 2018, founders of Austin-based Compost Pedallers Dustin Fedako and Eric Goff messaged all their subscribers and community; they were “hanging up their helmets for good.” After seven years, 540,000 kilograms (1.2 million pounds) of diverted waste, and nearly 6.5 million expended calories, the founders said that they “fought hard for composting. And they won.” They were pleased that Austin Resource Recovery was on track to adopt full municipal curbside compost pickup by 2020. Founded in 2012, Compost Pedallers was an LLC formed to provide curbside compost pickup services on bicycle and “Growing a Greener Austin.” Over their seven years in operation, they donated more than 135,000 kilograms (300,000 pounds) of finished compost to a dozen urban farms, saving an estimated $30,000 in soil amendments. Although unfortunate for the owners and participants of the program, their loss appears to be a positive trend toward attitudes of residential composting.

Across the country, organizations like Bootstrap Compost in Boston, Healthy Soil Compost in Chicago, Detroit Dirt, and Pedal to Petal in Victoria BC are blazing the trail for cities adoption of curbside compost. These companies offer fee-based service for weekly pickup, often providing the finished product back to local farms and gardens.  In lieu of municipal curbside services, these organizations are supporting the education and development of new market niches in cities that perhaps aren’t ready to make the leap.

According to the EPA, total composting rose from 1.84 million tons in 2013 to 2.1 million tons in 2015, and including composted yard waste, the total was more than 23 million tons. Despite this growth, estimates are that only 5 percent of food waste nationwide is composted, the remainder comprising an enormous 22 percent of all landfill waste. While compost services are increasing, there is still a largely unmet supply of education and availability for these services. In 1996, San Francisco became the first major city to adopt curbside composting, and today the service is now available in at least a half dozen U.S. cities including Seattle, Portland, and Boulder, CO. Additionally midwest cities including Ann Arbor, Michigan, and Iowa City, IA are either in beta testing or full-scale program launch.

Inspired by these companies, in 2016 my organization launched a bike-powered compost service of our own. On the program’s first day, we set out to pick up food waste from just eight homes. In two years that number has risen steadily to nearly 100 residences, ten businesses, and over 22,000 kilograms (50,000 pounds) of diverted waste annually. With growth in mind, it is our hope too that someday we too can hang up our helmets as our city implements full-scale municipal composting. Even if this means the ends of some small business enterprise, in the words of Dustin Fedako,“If we have learned anything from our work in composting, it’s that nothing ever really dies. It just breaks down to fertilize what’s next, what’s new, what’s yet to come.” 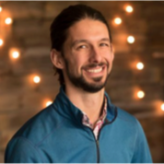 Levi Gardner is the Founder & Executive Director of Urban Roots, a non-profit community farm, market, and education center in Grand Rapids, MI. A West Michigan native, Levi has an M.S. in Community Sustainability and Ecological Food and Farming systems from Michigan State University and is a certified Permaculture Designer and Biointensive Grower. He additionally is the Chair of the City of Grand Rapids Committee on Urban Agriculture and an adjunct professor of Environmental Studies and Sustainability at Grand Valley State University. He lives with his family in Grand Rapids.