There is growing scientific consensus that we must rapidly transition to sustainable and ecological farming systems to avoid both climate catastrophe and ecological collapse. But unfortunately, a new pipeline of genetically engineered farm animals could further entrench the destructive industrial food system. A new report provides a scientific overview of the risks and concerns with genetic engineering of animals and highlights how new gene-editing techniques such as CRISPR may exacerbate the health, environmental, and animal welfare problems of factory farming. Examples of research include super-muscly pigs, hornless cows, and disease-resistant chickens and pigs.

Since the first GMO animal, the AquAdvantage salmon, was approved for human consumption in 2015, concerns about engineering animals have only deepened. Just last month, MIT Technology Review reported that “gene edited cattle have a major screw up in their DNA” after scientists at the FDA reviewed the genome sequence of a gene-edited hornless cow and discovered a stretch of bacteria with a gene conferring antibiotic resistance.

The Wall Street Journal recently wrote that the “unintended effects [of gene editing] have included enlarged rabbit tongues and extra pig vertebrae,” and STAT reported on a series of concerns about the unintended effects of CRISPR, including potential DNA damage and evidence that CRISPR’d cells might be missing a key anti-cancer mechanism and would, therefore, be able to initiate tumors.

Gene-edited animals could also pose risks to consumers and the environment. Gene editing may cause abnormal protein production, which could result in new food allergies for people. Research also shows that GMO animals like the super-muscly cow can’t utilize low-energy foods like grass as well as non-gene edited cows, and could require increased amounts of high-energy, polluting feed like GMO corn and soy.

Scientists are only beginning to understand the unintended effects of editing DNA to confer certain desirable traits. But one thing we do know: current conditions for animals in factory farms are deeply problematic. “Editing” animals may only serve to make animals “fit” better into crowded, unsanitary and polluting factory farms, and could compound already serious problems. Factory farms use significant amounts of land, GMO animal feed, fuel, and water and are major sources of water and air pollution and contributors to rising global greenhouse gas emissions. Indeed, GMO animals are being designed to accelerate the factory farming model at a time when it has never been more urgent to shift away from it.

Unfortunately, agribusiness is rushing ahead with GMO food animal experimentation. Big Ag lobby groups are pushing for more deregulation, and the Trump Administration is accommodating them. In March 2019, the Trump Administration reversed the import ban on GMO salmon into the U.S. Soon after, Trump issued an Executive Order to lower the already scant regulatory oversight for GMOs. This dangerous deregulatory trend, coupled with inadequate research, is why gene editing needs strong government oversight and mandatory third-party scientific assessments. History has taught us that we should not rely on companies to ensure their products are safe.

Instead of altering the animal, we need to fix the farm. Instead of creating GMO pigs that are resistant to diseases like PRRS (porcine reproductive and respiratory syndrome), we should focus on the root cause of the problem: industrial agriculture and horrendous factory farm conditions. We need to support sustainable and ecological agriculture systems that facilitate food safety, public health, animal welfare, and the preservation and restoration of biodiversity.

Consumers, farmers, retailers, and elected officials all have a role to play. We should support organic, plant-based foods and diversified, ecological farming systems, and lower our consumption of industrial meat and dairy. We can ask grocery stores and restaurants to not source GMO animals. We must also demand that all products of genetic engineering, including gene editing, should have robust, mandatory independent assessments for environmental and food safety concerns and clear on-package GMO labeling before ending up on our farms or our plates. 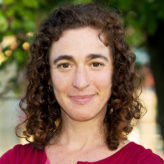 Dana Perls is the senior food and agriculture campaigner with Friends of the Earth, and leads the Food and Agriculture team’s international and national regulatory and market campaigns on biotechnology and genetic engineering. Prior to joining Friends of the Earth, she was the Northern California community organizer with Pesticide Watch, where she led regional campaigns to ban or regulate toxic pesticides used in agriculture. Dana brings a strong background in grassroots campaign organizing and environmental policy and combines them with her commitment to environmental justice. She has also worked on campaigns focused on water contamination to human rights to water in Panama where she served as a Peace Corps volunteer. Dana holds a Masters in City Planning from U.C. Berkeley in CA, and a B.A. from Cornell University.