Home » Op-Ed » Agricultural Carbon Markets Are Not a Climate Solution

When it comes to addressing agriculture and climate, the Biden Administration and Congress are going down a dangerous path that threatens to benefit the most polluting farm operations while failing to meaningfully address the climate crisis. Two central pillars of their approach, support for agriculture carbon markets and subsidies for polluting factory farms, will exacerbate concentration in the industrial agriculture sector, while increasing pollution in low-wealth communities, especially communities of color.

These are dangerous and costly distractions from proven policies and practices that have the ability to shift agriculture from being a leading contributor to climate chaos to being a major solution to the crisis.

Carbon markets have a decade-long track record of failing to stem greenhouse gas emissions, while harming Black and brown communities. So, why is the Biden administration digging in the dustbin of failed climate policy? A quick look at some of the strongest proponents of this approach reveals who stands to win. Corporations, including pesticide giants like Bayer and Syngenta and agribusinesses like ADM and Cargill, are backing the Growing Climate Solutions Act, a bill  that would give the U.S. Department of Agriculture (USDA) a major role in promoting soil carbon markets. Who stands to lose if the bill passes? Family farmers, communities of color, and the environment, as demonstrated by the over 222 organizations that are opposing it.

Another example of mega-corporations backing agricultural carbon markets is the Food and Agriculture Climate Alliance, which pushes soil carbon markets as a climate “solution.” Tellingly, despite years of resisting taking action on climate change, large agricultural players like the Farm Bureau and major food and agriculture companies find the Alliance’s approach palatable.

Why are these big players coming on board now? A handful of large agrichemical and seed giants stand to profit from soil carbon market schemes regardless of how financially successful the markets are themselves. Companies like Bayer and Syngenta are poised to further entrench their market dominance while perpetuating chemical intensive agriculture and control of our food system by offering technical assistance and technologies to track farmers’ carbon sequestration. For instance, Bayer’s Carbon Initiative will pay farmers for carbon sequestration under the condition that farmers use their proprietary seeds and chemicals and hand over tremendous amounts of extremely valuable farm data. Other companies like Indigo Ag have similar models. These companies will increase sales and receive permanent access to data before farmers see a penny of payment.

Carbon markets in other sectors have predominantly benefited large actors while leaving others behind. Soil and other agricultural carbon markets will be no different, exacerbating the consolidated ownership of American farmland and excluding smaller-scale farmers by creating a new revenue stream that requires large economies of scale to be viable. With small-to-medium scale farmers, producers of color and other socially disadvantaged farmers already struggling, it’s a recipe for the big getting bigger while smaller players increasingly lose out.

Diverting resources toward carbon market schemes is also in direct opposition to the goals of the Biden administration on climate and racial equity. Environmental justice leaders have opposed carbon market mechanisms for decades based on their role in human rights abuses across the globe. These markets have been plagued by fraud and a lack of integrity. This makes them, in essence, massive greenwashing schemes. The largest polluters can buy credits rather than reduce emissions (or even increasing their pollution) in vulnerable communities, including indigenous communities and communities of color.

For instance, major meat companies like Cargill, JBS and Smithfield (which recently settled in court after their hog farms in Bladen County, North Carolina made surrounding communities uninhabitable due to the waste) could claim to achieve “net zero” carbon emissions simply by buying enough carbon credits without changing practices.

Soil carbon markets also contain major structural and technical flaws. Changes in land use can rapidly release any stored carbon, and there is currently no standard for measuring sequestration in the first place. What’s more, farmers in certain regions of the United States have a severe disadvantage because their land may be less able to sequester carbon, regardless of how they farm.

More than 100 environmental justice, farmer and environmental organizations sent a letter to Congressional leaders urging them to implement real solutions to climate change in the agricultural sector by expanding and improving existing conservation programs, which farmers and ranchers across the country, from Georgia to Iowa and beyond, are ready to take advantage of.

Toward this end, the Agriculture Resilience Act and the Climate Stewardship Act would retool and massively expand existing programs like the Conservation Stewardship Program and the Environmental Quality Incentives Program to reward farmers for regenerative farming.

Fundamentally, we must set bold targets to reduce carbon and methane emissions in the first place. We must significantly curb greenhouse gas emissions from industrial agriculture, including tracking and mandating methane reductions from factory farms instead of propping them up with massive subsidies. And we must harness the massive purchasing power government programs like the USDA National School Lunch Program and the military to advance climate-friendly food procurement, which could be one of the highest impact ways to reduce agriculture-related emissions.

With less than a decade remaining to have any reasonable chance of keeping global temperature rise to no more than 1.5 degrees Celsius, the failure to invest in true solutions is untenable. Rather than embrace models that fail to address the climate crisis while actively harming frontline communities near pollution hotspots and further enriching and entrenching the power of agribusiness giants, our government must take bold action to advance truly regenerative agricultural solutions to benefit farmers, eaters, and the environment. 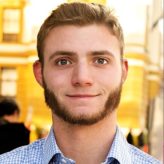 Jason is a Senior Food and Agriculture Campaigner at Friends of the Earth.