Disco Soup is an event where perfectly edible food on its way to the landfill is rescued, chopped up, and transformed into a free meal for the public. According to Disco Soup Coordinator and SFYN Brazil leader Gabbi Bonilha, World Disco Soup Day will be one of the largest grassroots, zero-budget campaigns ever.

“Food Waste is a big issue which affects the whole world. Everyone on this planet has to understand its consequences,” says John Kiwagalo, World Disco Soup Coordinator and National Coordinator of SFYN Uganda. “It is important to organize World Disco Soup Day on a global scale for people to find more local, concrete solutions to curb the problem of food waste.”

While 795 million people experience food insecurity, more than one-third of the food produced around the world is thrown away. Uneaten food accounts for 25 percent of global freshwater consumption. As food sovereignty experts like Raj Patel have pointed out: rerouting food waste is not a solution to feeding the world’s hungry. However, Disco Soup’s aim to reduce the amount of edible food thrown out each day could help significantly advance the U.N.’s Sustainable Development Goals to combat climate change, increase responsible consumption, and build a hunger-free future.

“As World Disco Soup Day will be happening all around the world, we can show it is not just a local problem, but that food waste is present globally,” Bonilha said. “For those who already fight against food waste, I hope they see they are not alone, and I hope that everyone will learn that they can do their part, too. People should understand that when you throw out food, you are throwing out the work of the farmer, natural resources, and, most importantly, a meal that someone who is suffering from hunger could be eating.”

At Terra Madre Salone del Gusto 2016, the Slow Food Movement’s largest international gathering in Turin, Italy, SFYN leaders from around the world devised the plan for the first-ever World Disco Soup Day to raise public awareness of the amount of perfectly edible food sent to landfill.

The Slow Food Movement started in 1989 as an alternative to industrialized food and fast life. In more than 160 countries, the Slow Food Movement works to preserve edible biodiversity, to prevent the disappearance of local food cultures, and to protect the small farmers and pastoralists who feed the world.

“World Disco Soup Day is creating a bigger connection between young food activists all around the planet and calling society’s attention to food waste as an enormous global problem,” said Caio Bonamigo Dorigon, World Disco Soup Day Coordinator and Coordinator of SFYN Brazil. “People that didn’t know each other are working together, each with a different reality and culture, to pursue the same goal: fight against food waste.” 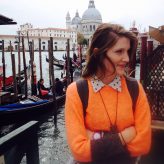 Lauren Nelson is a Master's student at the University of Gastronomic Sciences in Pollenzo, Italy currently pursuing her M.A. in Gastronomy, Food Cultures and Mobility studies. Lauren received her B.A. in anthropology and psychology from Hendrix College. She has farming and non-profit experience working with the Slow Food Youth Network, Heifer International, Slow Food USA, and the USA Pavilion at EXPO Milano 2015. Follow Lauren's gastronomical pursuits on Instagram.