Dr. Barbara Gemmill-Herren is an agroecologist who lived and worked in Africa for over 25 years and is currently working as an agroecology consultant for the World Agroforestry Centre (ICRAF).  She is a chapter author of the new Economics of Ecosystems and Biodiversity for Agriculture and Food (TEEBAgriFood) report focused on evaluating our agriculture and food systems while considering a range of social, human, and environmental dimensions across the value chain.

Dr. Gemmill-Herrin served as the Delivery Manager for the Major Area of Work on Ecosystem Services and Biodiversity at the United Nations Food and Agriculture Organization (FAO). She implemented a global Pollination Services project for the FAO and worked on the FAO’s Ecosystem Services in Agriculture production. Gemmill-Herrin was a key contributor to the “Beacons of Hope” initiative for the Global Alliance for the Future of Food and served as the Director of the Environmental Liaison Centre International.

Food Tank talks to Dr. Barbara Gemmill-Herren about her chapter in the new TEEBAgriFood report about today’s realities, and tomorrow’s challenges in the eco-agri-food system.

Food Tank (FT): What is the most interesting thing you learned from working with TEEBAgriFood?

Barbara Gemmill-Herren (BGH): The process of building a strong foundation for understanding TEEBAgriFood has taken us far beyond the edge of agricultural fields, helping us to better understand the linkages and dependencies all along the food chain. What happens at one point, such as international trade, or retail sales, has a ripple effect throughout the system.

BGH: The health impacts of our current food system cannot be ignored. I don’t think people realize all the unintended consequences of our current forms of food production that neglect the contribution of nature. In fact, much of our food system seriously impacts nature by creating widespread degradation of land and water, increasing greenhouse gas emissions, and contributing to biodiversity losses. However, there is also an impact on human health, through over and under malnutrition, diet-related disease, and the livelihoods of farmers around the world. Fortunately, the solutions are immediately linked to the problem, and by recognizing and strengthening agricultural practices that enhance ecosystem services and build natural capital we can support regenerative forms of agriculture and food that can generate positive externalities.

FT: How is the approach the TEEBAgriFood report takes different from that of the current industrial food system for thinking about agricultural systems?

BGH: This report not only recognizes negative externalities and their costs to nature and people, but also the positive benefits from building natural capital.

FT: What is an ‘invisible value’ and what is an example from the eco-agri-food system?

BGH: The TEEBAgriFood report has a good example of the global costs of global food trade. As international trade in food and feed products has increased, insidious forms of visible, and invisible, flows are occurring. For each shipment of food being transported from one part of the world to another, the natural resources used in the production of each shipment is also, in a sense, being ‘virtually’ transferred to the recipient country. Essentially, the evolution of international trade has facilitated the transfer of resources from the centers of supply to the centers of demand.

The inequities involved in such transfers have been noted: the relative price of manufactured exports from industrialized countries has increased, while the relative price of primary exports from lesser developed countries has decreased. As a result of an analysis through a TEEB AgFood lens, indicators such as the material footprint and water footprint can emerge and allow the material consumption levels of individual countries, including the upstream flows used to produce respective imports and exports, to be characterized. These upstream material requirements are also known as: materials embodied in trade, indirect flows, hidden flows, virtual flows, or ‘ecological rucksacks’.

Biomass can serve as a case in point. In 1900, biomass was still the major resource used by societies, as a source of nutrition as well as for construction and energy provision. Global biomass use stood at 5 billion tonnes in 1900, which represented 75 percent of all material use. By 2010, biomass use had increased to 21 billion tonnes. As biomass is transported in large volumes across the world, the underlying cause—intensification of agricultural production—acts like a mining process in several parts of the world. Agricultural intensification, carried out without regenerative practices, accumulates disturbances over time putting millions of hectares of land at risk of collapse by degrading nutrients, reducing soil, fauna, and floral diversity, and replacing native species with invasive ones. It can also lead to a homogenous agroecosystem, a simplified landscape, and more prevalent bioinvasions. This means degradation in the quality of these lands that are on the producing end of biomass transfers globally.

FT:  What principles should be applied to international trade policy to increase global food access and food security?

BGH: If global farm subsidies were ended, global farming would change. Different crops would be planted, land usage would change, and some farm businesses would contract while others would expand. However, a stronger and more innovative industry and new relationships in food systems would emerge with greater resilience to market fluctuations. Private insurance, other financial tools, and diversification could help cover risks for small and medium farmers, as they do in other industries.

FT: What do you want people to know most about the TEEBAgriFood report?

BGH: It provides a very clear exposition of the challenges and problems created by current food systems, but also the way out. It recognizes the cracks in the food system that continue to widen and cause inequality and hardship, and how pathways to sustainability, by attributing true costs along the value chain and recognizing the value of nature, can be built.

The goal of TEEB AgriFood is to more comprehensively determine the costs, benefits, and dependencies of agriculture and food production. What makes some produce less expensive in most supermarkets is in part the use of cheap—often subsidized—fertilizers and pesticides, but that retail price does not take into account hidden costs like environmental damage from runoff or human impacts on health and livelihood. Conversely, these prices do not recognize the positive benefits created by more sustainable forms of agriculture. To ensure the sustainability of agriculture and food systems, an important step is to account for the side effects, or externalities, through market mechanisms. TEEBAgriFood is creating a framework for looking at all the impacts of the ‘eco-agri-food’ value chain, from farm to fork to disposal, including effects on livelihoods, the environment, and health. This can help farmers, decision makers, and businesses more explicitly look at the impacts of different practices and policies 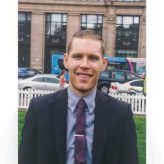 Iain is a former Research and Communication Intern for Food Tank and recently completed an MSc in Environmental Policy and Regulation from the London School of Economics. He also holds an LL.B from the University of Glasgow and a B.A. with majors in Environmental Studies and Political Science from the University of Victoria. He is originally from New Westminster, British Columbia, Canada, but now lives in London, England. In his free time, Iain enjoys cooking and playing lacrosse.