The following article is part of the ongoing series From Farms to Incubators: Spotlighting women innovators working to solve farming challenges. 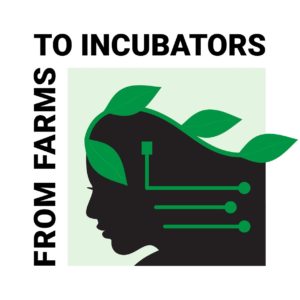 Agriculture and technology both have a long history in California, but until recently have rarely intersected. Technology is focused on disruption and innovation, while much of agriculture is still managed with clipboards and pencils. One commonality is that women and individuals with diverse cultural/ethnic backgrounds have historically been underrepresented in both industries. Now, a new generation of startups led by women, with a diversity of backgrounds and ethnicities, is seeking to provide novel perspectives and solutions to agriculture’s problems with tech innovation. Since 2016, award-winning investigative journalist Amy Wu, the founder of From Farms to Incubators, has focused on highlighting the stories of women innovators, especially women of color, in agtech in California, and now beyond. These have resulted in a series of ongoing portraits that use written word, still photographs, and video. A selection of these portraits will be featured on Food Tank, and culminate in a hardcover book scheduled to be completed in 2020. Food Tank is proud to showcase this series and lift up the stories of women entrepreneurs in ag and tech.

Trace Genomics produces soil microbiome kits, and provides data analysis with growers as their target customers. There are 25 full-time staff including Parameswaran and her partner and co-founder Diane Wu. The company maintains a sales office in Salinas.

The Journey to Entrepreneurship

Salinas, Calif.—In 2016 Poornima Parameswaran and Diane Wu the founders of Trace Genomics experienced their first taste of success. The company won a spot in the THRIVE Accelerator a highly competitive agtech incubator based out of Silicon Valley.

Trace, launched officially in 2015, had beat nine other startups in THRIVE and was recognized as the most promising agtech startup. There is a picture of Wu and Parameswaran receiving accolades from media mogul Steve Forbes at the 2016 Forbes AgTech Summit hosted and held in Salinas. 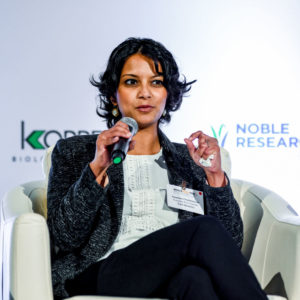 The paradox in this is that neither agriculture or technology runs in Parameswaran’s family. She considers herself a pioneer—the first in her family to venture into tech startups, and the first to study in the United States.

The 35-year-old was born in India to what she calls a “conservative family”—her father was a petrochemical engineer and her mother a homemaker. She is the only girl in her family but has a brother who is a computer scientist in India. When she was six, the family moved to Bahrain, where her father worked for oil companies. As a child, she was always curious.

“I was also a bookworm,” she says.

She and her family at first thought she would be a doctor, engineer or scientist. But by the age of 13, she knew that she wanted to explore a career in research.

She was a stellar student and the plan was she would continue her studies at the prestigious Indian Institute of Technology (IIT). She had ambitions to become a professor and set up her own research lab and teach, “but we also knew she was drive by a passion to make an impact on the community,” her father, Vaidyanathan Parameswaran says. “I wanted to know what made us tick,” she said. “I looked at research opportunities in India, but there were more opportunities in the U.S.”

Persuading her parents wasn’t as challenging as she’d anticipated.

“My parents obviously recognized my ambition and supported that ambitious part of me,” she says. At 16, Parameswaran came to the U.S. to attend the University of Texas, Austin.

She was a top student, holding a steady spot on the dean’s list and in the dean’s scholars program, graduating with a 3.98 G.P.A. with a major in molecular biology and a minor in computer science.

Driven by a love for research and desire to use her science skills in public health, she enrolled in the Ph.D program in the Departments of Microbiology & Immunology and Genetics at Stanford University in 2004.

“I was moving toward a career in academia and going up the tenure track, but once I got into Stanford I was bitten from the bug of innovation and really making an impact on society.”

In Andrew Fire’s lab, she met Diane Wu, at the time another Ph.D student.

They shared a passion for using genomics to tackle the roots of disease and applying their research to the real world—and were both passionate about big data too.

“It’s a new field,” Parameswaran says, “exciting because you are creating new tools and applications.”

After graduating from Stanford in 2010, she went onto to a post-doc at the University of California, Berkeley, where she worked with the Ministry of Health in Nicaragua and was involved in a clinical study.

“I was interested in leveraging genomics to make a clinical impact, and my passion was using genomics to find markers to dengue,” a virus carried by mosquitoes and often displayed in dengue fever, common in third-world tropical countries.

All the while, she and Wu continued the legwork for their product to detect diseases in soil, and what would become Trace Genomics.

In their research, the two met with growers—many of them in the Salinas Valley—sharing their prototype, and fast discovered that growers, whether of produce or livestock, were concerned about soil health and monitoring.

Agriculture and entrepreneurship are relatively new territories for Parameswaran and Wu. They are scientists by training and at the core, but their passion for Trace Genomics drove them through challenges and roadblocks.

Fundraising, often a significant challenge for startups especially in the agtech sphere, can be additionally challenging for women. The venture capital world is dominated by men, and a recent study showed that in leadership positions at the top 100 venture capital firms in the U.S., women only occupy 7 percent of positions.

As with the majority of women interviewed for this article series, Parameswaran said she noticed that they were often the only or one of a few women at venture capital firms or at agtech conferences. But she did not feel it prevented her from achieving things.

“It’s hard not to notice, but if anything it makes you more determined,” she says. “It’s an opportunity to show the world that you’re like the other gender, there’s nothing different. I mean sometimes we shake it off or roll our eyes. It doesn’t really enter our conscious.”

She explains: “our approach is even if someone makes a disparaging remark just plow through,” she says. “We shake it off and move forward, and also that’s where being proactive and plowing through that barrier becomes important. Our way around it has been to go to other people.”

Parameswaran said Trace Genomics’ momentum came in part from having supportive professors and mentors from Stanford and from getting into competitive accelerators such as Illumina.

She said it also helped that their product tackles agriculture from the vantage of genomics and biotech, both hot areas for investment.

As newcomers, if not as outsiders, humility also helped. She and Wu spent a lot of time in Salinas Valley at the start, learning. “We were just sponges ready to soak it all in. For the most part we listened. We also had this mentor network and through the scientists’ groups as well, so it was a multipronged approach for us as well.”

Three years since they were recognized at the Forbes AgTech Summit in Salinas, Parameswaran and Wu have seemingly found a balance when it comes to running the company. They split their time between Salinas Valley, where the majority of their customers are, and the company’s main base of Burlingame just outside San Francisco.

They tag team fundraising and a merry-go-round of speaking engagements at grower and industry conferences: Wu focuses on engineering and operations while Parameswaran handles consumer and product development.

The focus has been on growing the team and also developing and launching a new soil test specifically for Fusarium wilt, a disease specific to lettuce that has broken out in the U.K. and hit some areas in Yuma, Arizona. The test surfaced after she and Wu met with lettuce growers in Yuma.

The company also outgrew the Western Growers Center for Innovation & Technology and moved into their own office in downtown Salinas with a new sales team.

Wu was also named to a Forbes 30 under 30 list of scientists. Trace hired a chief commercialization officer who is charged with expanding into row crops such as corn and soy, significant especially in the Midwest.

The company grew its product line from a soil microbiome testing kit focused on disease indicators to soil function indicators. Insights have extended from 2 to 17 crops including corn and soybeans. Trace Genomics is preparing for a commercial launch of these products in time for the 2020 growing season.

Outside of the lab and incubator, married life keeps Parameswaran busy along with her almost 5-year-old twins Niam and Saanvi. Parameswaran and her husband, Kitch Wilson, an instructor at the Stanford School of Medicine, share the raising of their twins. And her parents come to help during busy months.

“We know that her ability to think outside the box, her passion, leadership, discipline, and resolve will make her a successful problem-solver and entrepreneur,” Parameswaran’s father says.

By early 2019 Trace Genomics raised another US$13 million—the majority of it from venture capital. It also expanded to 25 people on the team including experts in biology, agronomy, data science, and software engineering.

Parameswaran observes the shifts in the agtech sector when it comes to diversity. Within the conferences at which she often speaks, she’s observed there are more women attendees and entrepreneurs.

“We are certainly seeing a lot more diversity. It’s exciting to see more women in general, minority women and we are seeing this trend in agtech, but we are also seeing this in other technologies, not necessarily related to ag but in the Silicon Valley landscape.”

Upon reflection, she says, “I actually think agriculture is a very friendly industry as long as the technology helps growers solve the problems that they lay awake at night thinking about.”

“Whether it comes from a woman’s mouth or man’s mouth, it doesn’t matter. I think it’s all about your major focus being about helping them solve their needs.” 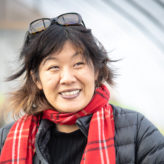 Amy Wu is a writer for women’s ag and agtech movement and the founder and chief content director of From Farms to Incubators. From Farms to Incubators includes a documentary and a forthcoming book that spotlights women leaders in ag and agtech. It is a resident of the Western Growers Center for Innovation and Technology in Salinas, and continues on its mission of expanding the profiles of women in food, farming, and tech. Amy is an award-winning journalist with significant international reporting and teaching experience and previously reported on agriculture and agtech fo The Salinas Californian in Salinas, Calif. She has also worked at Time magazine, the Rochester Democrat & Chronicle, for the USA Today Network; and has written for The New York Times, HuffPost and Wall Street Journal. She spent six years working in Hong Kong, widely reporting within the Asia-Pacific region including Shanghai and Singapore. She earned her master’s degree in journalism from Columbia University, and speaks fluent Mandarin Chinese. https://www.linkedin.com/in/amyhwu/